WASHINGTON, Feb. 11 (Yonhap) -- U.S. President Donald Trump is open to having another summit with North Korean leader Kim Jong-un but only if it will lead to a nuclear deal, his national security adviser said Tuesday.

Robert O'Brien told an audience at the Atlantic Council think tank that the president has been clear about that and will act independently of any political considerations.

O'Brien spoke a day after CNN reported that Trump has told his advisers he does not want another summit with Kim before the November presidential election in the United States. The view within the administration is that the risks of resuming denuclearization talks far outweigh the potential benefits, it said. 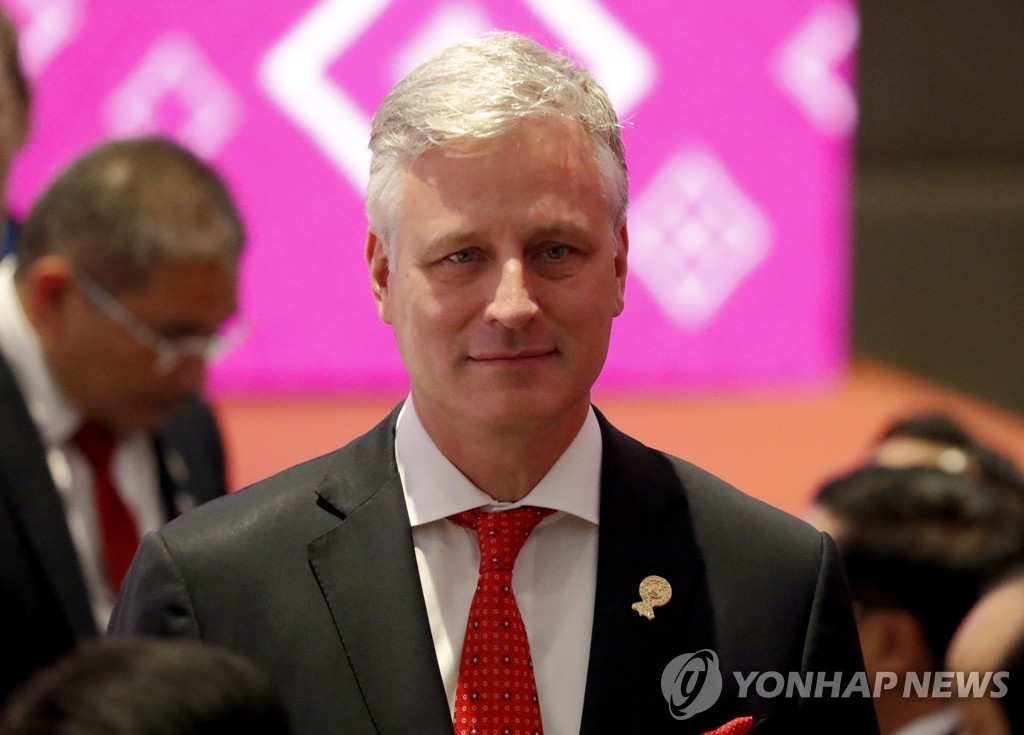 "We'd like to see negotiations continue if the negotiations lead to North Korea honoring the commitment that Chairman Kim made in Singapore," O'Brien said, referring to a pledge to work toward the complete denuclearization of the Korean Peninsula in exchange for U.S. security guarantees.

"We'll keep working at it. We'll have to see as to whether another summit between the leaders is appropriate. But President Trump has made it very clear that if he can get a great deal for the American people, he'll go to a summit, he'll go to a meeting, he'll talk to just about anybody. But we have to be able to get a good deal," he said.

Trump and Kim held their first summit in Singapore in June 2018 and signed an agreement committing the two sides to work toward the denuclearization of the peninsula and improved bilateral relations.

The pair met a second time in Vietnam in February 2019, but the summit ended without a deal after the U.S. rejected North Korea's offer for partial denuclearization in return for major sanctions relief.

In June that year, they met again at the Demilitarized Zone on the inter-Korean border and agreed to restart working-level negotiations. The next set of talks opened in Sweden in October but also ended without progress.

"We'll have to wait and see if negotiations restart and see what's on offer," O'Brien said. "Right now there's not a scheduled summit, but if there was an opportunity to move the ball forward for the American people, he's always willing to do that. Whether it's viewed to be politically expedient or not, he's looking to do things that are good for the country."