SEOUL, Feb. 12 (Yonhap) -- Yonhap News Agency and the state-run National Center for the Rights of the Child (NCRC) agreed Wednesday to launch a joint campaign in March to help overseas Korean adoptees find their birth families.

Yoon Hye-mee, chief of NCRC, affiliated with the Ministry of Health and Welfare, and Cho Sung-boo, president and CEO of the news agency, signed a memorandum of understanding for the project at Yonhap headquarters in central Seoul.

Under the agreement, Yonhap News will establish an online information platform to connect adopted people and their biological families.

The news agency will publish news articles on adopted people and on the site, while NCRC will upload adoptees' information and life stories. They have jointly created about 20 such articles since March last year.

The two organizations promised to cooperate not only to help their family searches, but to promote a sound culture of adoption by shedding light on their lives via the online platform. 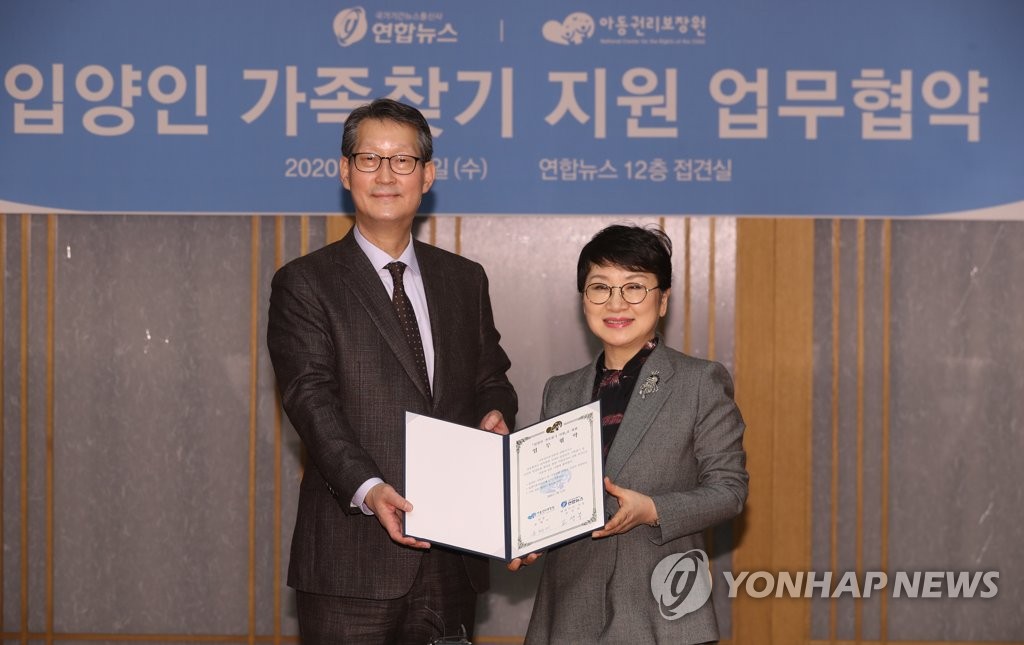 "The issue of overseas adoptees is our sore spot and a problem we need to solve," Cho, president of Yonhap, said at the signing ceremony.

"Let's join forces to actively work to find their families and improve public awareness of adoptees," he added.

Yoon of NCRC also vowed efforts to support adoptees and their long-lost families.

"The National Center for the Rights of the Child will fulfill its role by actively conducting projects and campaigns to support adoptees and their families," she said.