SEOUL, Feb. 12 (Yonhap) -- Rival political parties and lawmakers are attempting to capitalize on the popularity of Oscars-winning "Parasite" in their campaigning for the April 15 parliamentary elections.

Some of its lawmakers have uploaded posters inspired by "Parasite" on their Facebook accounts, vowing to become legislators that exhibit the strengths shown by the film's director, Bong Joon-ho.

Mimicking the "Parasite" poster, in which the film's main characters have their eyes covered, DP lawmakers filed their own versions of online posters appealing to voters.

Uploading a photo of him posing like the main characters of "Parasite," Rep. Kang Byung-won stressed the role of politics to resolve the severe income disparity between the haves and have-nots that was portrayed in the film.

Rep. Kwon Mi-hyuk, who seeks to run in a district of Anyang in Gyeonggi Province, mentioned Bong's nickname, "Bongtail," that was made in reflection of his detail-oriented methods of work.

"I would like to earn the nickname 'Kwontail,' with which I can write the history of the National Assembly and Anyang, as Bong did," she said.

The main opposition Liberty Korea Party (LKP) focuses on implementing the marketing strategy using Bong's popularity as his hometown is Daegu, a traditional stronghold for the conservative party.

Several LKP lawmakers have unleashed election campaigns related to the director, including the establishment of a film museum and the expansion of movie theaters.

Highlighting his ties with Daegu, Rep. Khang Hyo-shang said the southeastern city should evolve into a cultural hub by setting up a film museum.

Rep. Kwak Sang-do, who was elected in a Daegu constituency in 2016, pledged efforts to increase the number of movie theaters and other cultural facilities.

Some preliminary candidates pledged to build a movie street, a park and a memorial hall in Daegu to celebrate Bong's feat. 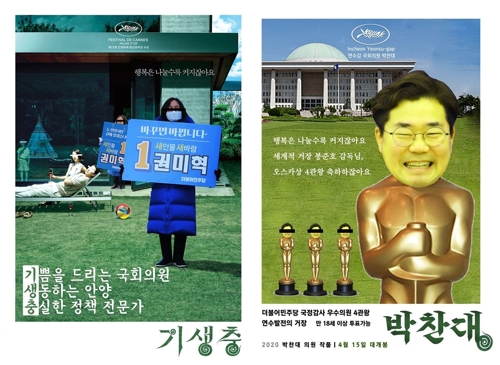 Political parties ride coattails of "Parasite" in their election campaigning

Political parties ride coattails of "Parasite" in their election campaigning