SEOUL, Feb. 12 (Yonhap) -- Asiana Airlines Inc., South Korea's second-biggest airline, has asked its cabin crew to take unpaid leave due to the suspension of some of flights to China amid the spreading coronavirus outbreak, a company official said Wednesday.

Hundreds of crew members are set to take unpaid leave voluntarily from Saturday through Feb. 29, a company official said, in a desperate move to save costs.

The official did not give further details on exactly how many cabin crew members have applied for the unpaid leave. 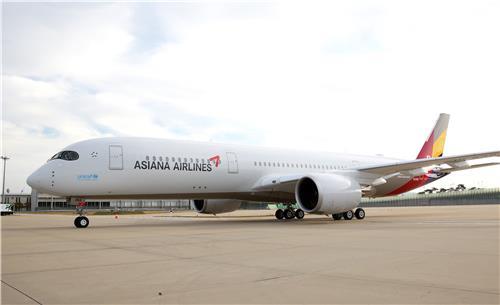 The unpaid leave comes as Asiana has temporarily halted 12 out of 26 routes to mainland China and reduced flights on 12 routes to the world's most populous country, leaving only two routes intact.

Asiana is currently running 57 flights to China per week, compared with 204 before the COVID-19 virus outbreak.

The virus has killed more than 1,100 people in mainland China.

Asiana said flights to China accounted for 19 percent of its total sales at the end of September last year, the highest such proportion among local airlines.