SEOUL, Feb. 13 (Yonhap) -- Lee Kyung-sook, an 84-year-old Seoul citizen, visited a multiplex theater in the posh southern district of Gangnam on Wednesday afternoon with her daughter and grandson.

Wearing a mask to protect herself from the novel coronavirus, she said she was so proud of the homegrown movie "Parasite"'s triumph in at this year's Academy Awards.

"I saw this movie last year after it won the Cannes Palme d'Or," she said. "I want to watch the movie again to look into the metaphors and nuances that the film has and to find out its charm that caught the hearts of audiences around the world."

Also, she intended to share the impression and emotion that she had from Bong Joon-ho's masterpiece last year with her daughter and grandson, who had not yet seen it. 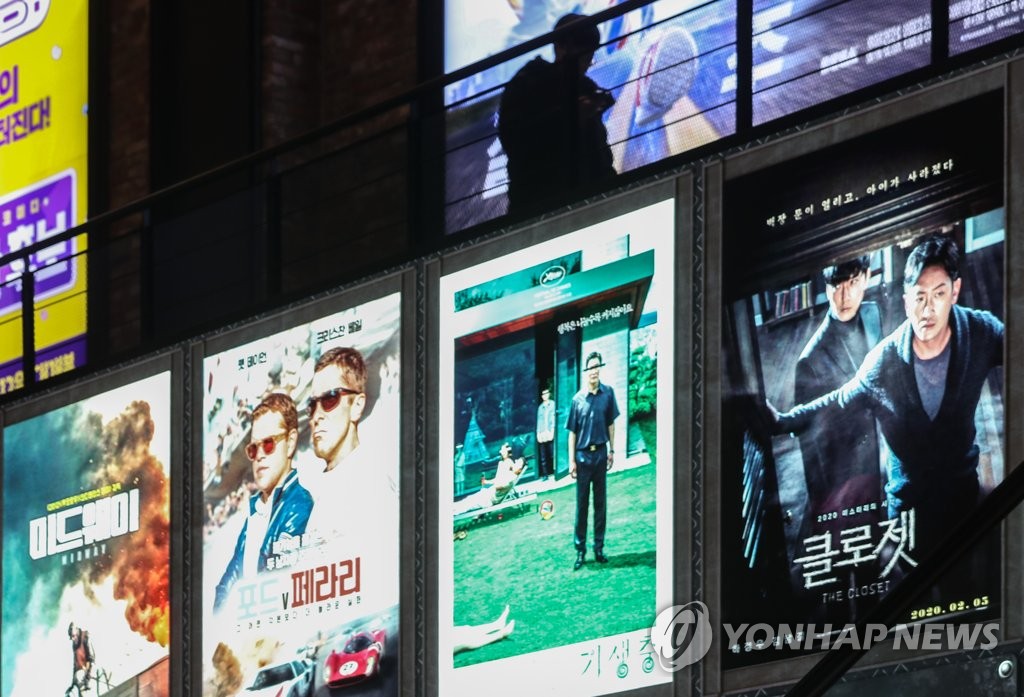 "Parasite" is director Bong's seventh feature film. It depicts the class disparity through a down-and-out family infiltrating into the home of a wealthy family. 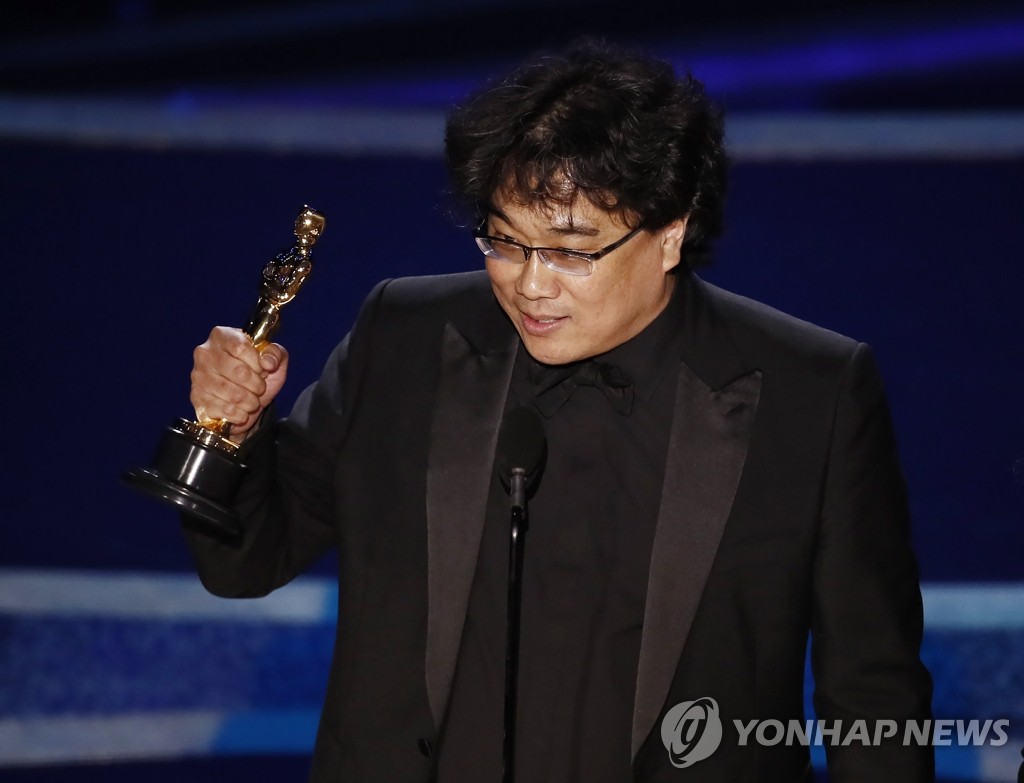 For local film buffs eager to see the historic film on the big screen again and celebrate Korean cinema's first Oscar win, South Korean multiplex chains have brought the movie back to screens this week. "Parasite" was first released on May 30 in local theaters last year and attracted about 10 million moviegoers.

CJ CGV, the biggest multiplex cinema chain under the wing of CJ Group, began a rerun of the film from Monday afternoon at about 40 theaters nationwide, including 14 in Seoul. Megabox and Lotte Cinema are also showing "Parasite" at 30 theaters each.

"Parasite" stood fifth on the South Korean box office on Tuesday and Wednesday, garnering 8,339 and 12,601 moviegoers, respectively, according to data by the Korean Film Council.

CGV said the popularity of "Parasite" is larger than expected, regarding the fact that it has been available on streaming services and DVDs.

"On weekdays, only about 10 percent of the tickets of each showing are sold. But 'Parasite' sold about 50 percent of its available tickets on Monday," an official from CGV said. "On Tuesday, the percentage rose to 70 percent for an evening session at our Yongsan theater."

The unprecedented winnings at the Oscars seemed to encourage people to see the movie again and attract those who have not seen it yet, he added.

A new black-and-white version of "Parasite," to be released on Feb. 26, will also offer another choice for film buffs and "Parasite" fans. 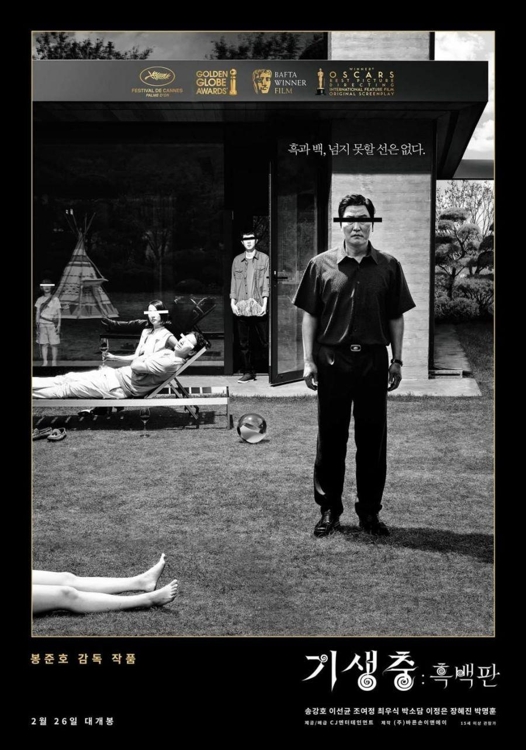 At the same time, "Parasite" has been also getting an Oscar boost in North America and Europe thanks to its critical momentum and the growing fanbase of Bong, the so-called Bong hive.

And the number is likely to reach $50 million, with the film's North American distributor, Neon, moving to expand its showings to some 2,000 screens by the weekend from some 1,060 screens currently.

Moreover, "Parasite" made a record-breaking debut at the British box office, scoring £1.4 million ($1.81 million) for its opening weekend. It is the highest opening-week record won by a foreign-language film in Britain.

In Italy, it also topped the local box office, garnering 157,000 euros on Tuesday, while its box-office success continued in Spain to become the most-viewed film on Tuesday.

"Parasite" is also on a roll in Asia as its reruns also began at CGV theaters in Turkey last Friday and Indonesia on Tuesday. 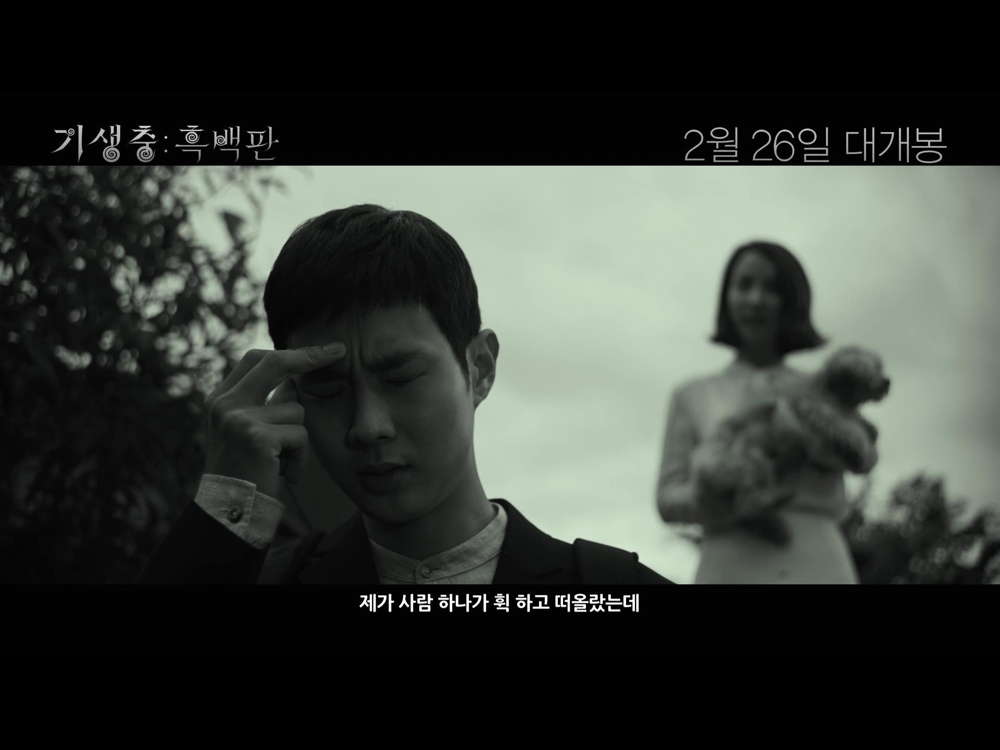 The South Korean cinema industry expects the "Parasite"-led Oscar boom to revive the film market which has been struggling with a sharp drop in ticket sales amid fears over the COVID-19 virus.

Last weekend, about 810,000 people came to theaters, compared with about 2.7 million admissions recorded in the previous week and about 1.2 million two weeks ago.

"A growing number of people are interested in other Oscar winners, like 'Jojo Rabbit,' 'Little Women' and '1917,'" the CGV official said.

The World War I film "1917," which won for visual effects, sound mixing, and cinematography at this year's Academy, will hit South Korean screens next Wednesday.