SEOUL, Feb. 13 (Yonhap) -- All evacuees airlifted earlier this week from Wuhan, the epicenter of the COVID-19 virus outbreak, tested negative for the illness, the country's health authorities here said Thursday.

A total of 147 South Koreans, their Chinese spouses and family members were evacuated from China on Wednesday.

The Korea Centers for Disease Control and Prevention (KCDC) said five evacuees -- three South Koreans and two Chinese nationals -- who showed symptoms of the novel coronavirus upon arrival in Seoul from the Chinese city of Wuhan on Wednesday have all tested negative for the potentially fatal illness.

The center said the other evacuees also tested negative.

The evacuees are staying at a temporary shelter in Icheon, 80 kilometers southeast of Seoul, where they will need to stay for 14 days, the virus' incubation period.

There are still an estimated 100 South Koreans in Wuhan, raising speculation that Seoul could send another flight to bring back them. 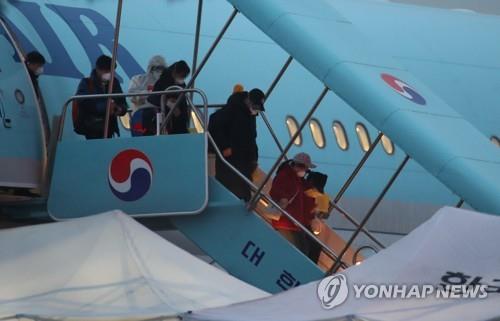