SEOUL, Feb. 13 (Yonhap) -- A Navy rescue ship will be equipped with a British-made, brand-new sonar system, officials said Thursday, six years after the vessel's system was found to be unfit for military operations amid criticism it's no better than a fishfinder.

The issue of the substandard sonar system for the 3,500-ton Tongyeong came to light in 2014, when it was to be mobilized for search and rescue operations following the deadly sinking of the Sewol ferry in April of that year.

"The Defense Acquisition Program Administration is now putting a sonar system made by Thales Group in the Tongyeong, which is to be completed this week," a Navy officer said. "Then the Navy will test it until early March."

The ship was completed in 2012, but the Navy had refused to accept delivery, complaining that it did not work properly.

Except for hull-mounted sonar systems and remotely operated underwater vehicles, however, the ship turned out to have met military requirements, so the Navy accepted it in 2015 and has put it into operation.

"The new sonar system is expected to enable the ship to fully carry out its due role," another official said. 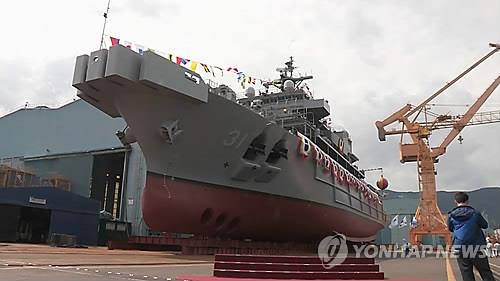