SEOUL, Feb. 13 (Yonhap) -- About 740 soldiers are quarantined as part of efforts to prevent the new coronavirus from spreading into barracks, the defense ministry said Thursday.

The quarantined soldiers, including 520 conscripts, have either visited China, Hong Kong or Macao in the past 14 days or had contact with people who traveled to those places, according to the ministry.

"No confirmed or suspected cases have been reported among our service personnel" a ministry official said.

Since the end of last month, the ministry temporarily banned service personnel from visiting China. The South Korean government issued a travel alert for China except for Taiwan, and called for "restraint" of travel to Hong Kong and Macau.

"Currently, the number of soldiers quarantined after visits to the cited countries stood at around 40. We continue to implement related preemptive measures against the virus," the official added.

As of early Thursday, South Korea had 28 confirmed cases of the novel virus, named COVID-19. 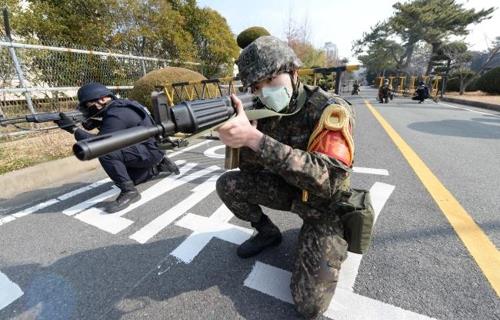