Shin, Cho and Sung were charged with collecting and reporting confidential information on prosecutors' investigations into the 2016 bribery scandal to the Office of Court Administration, while serving as judges at the Seoul Central District Court. 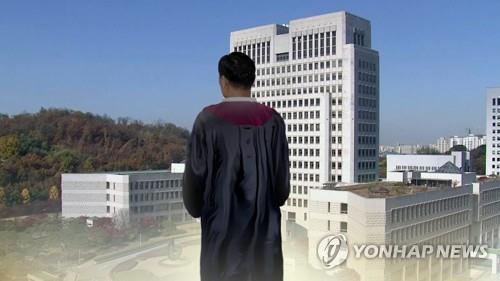 In their previous hearing held at the Seoul Central District Court on Jan. 20, prosecutors demanded a two-year imprisonment for Shin and a one-year jail term each for Cho and Sung, accusing them of colluding to leak confidential investigation information to deter further probes into the judiciary in connection with the 2016 scandal.

The scandal centers on accusations that a judge-turned-lawyer and a judge from Incheon District Court accepted bribes from Jung Woon-ho, former head of a local cosmetics chain, in return for pulling the strings for him to mitigate the sentence in his embezzlement case. A dozen suspects, including the Incheon judge and judge-turned-lawyer, were convicted and given prison sentences later.

But the Seoul court refused to recognize the prosecution's argument on suspected collusion among the three judges and acquitted them of the charges.

"It is difficult to conclude that the Office of Court Administration implemented any action plans aimed at putting pressure on the prosecution to prevent an expansion of its investigation," Judge You Young-geun said in the ruling.

"Judge Shin only reported the information to the Office of Court Administration just as part of judiciary administrative procedures. It is difficult to determine that he had acted under an instruction from Lim Jong-hun, a former deputy head of the court administration office," You said.

You also noted that there is no evidence to prove collusion among the three judges and the information disclosed by them didn't appear to have any value as official secret.

Of the three judges, Sung had previously drawn public attention after sentencing South Gyeongsang Province Gov. Kim Kyoung-soo a year ago to two years in prison for colluding with a power blogger to carry out a massive rigging of comments on internet news articles in favor of President Moon Jae-in ahead of the 2017 presidential election.