SEOUL, Feb. 13 (Yonhap) -- Soldiers and equipment of a U.S. armored brigade combat team have started to arrive in South Korea for a rotational deployment aimed at supporting the 2nd Infantry Division, the Eighth Army said Thursday.

Tracked vehicles and other equipment began arriving at the southwestern port of Gwangyang this week in line with the arrival of the 2nd Armored Brigade Combat Team of the 1st Infantry Division at Fort Riley, Kansas, according to the Eighth Army.

The arriving brigade is replacing the 3rd Armored Brigade Combat Team of the 1st Cavalry Division for a nine-month rotational mission. M1 Abrams tanks and M2 Bradley Infantry Fighting Vehicles will return to the home station following a due logistical process, it said.

"We're really looking forward to the Dagger Brigade's arrival and expect nothing but the best from a unit of the Army's oldest division," Maj. Gen. Patrick Donahoe, the Eighth Army's deputy commanding general of operations, said referring to the unit by its nickname.

The Army said the deployment will expand and enhance the partnership between the two countries and support their "iron-clad" alliance. 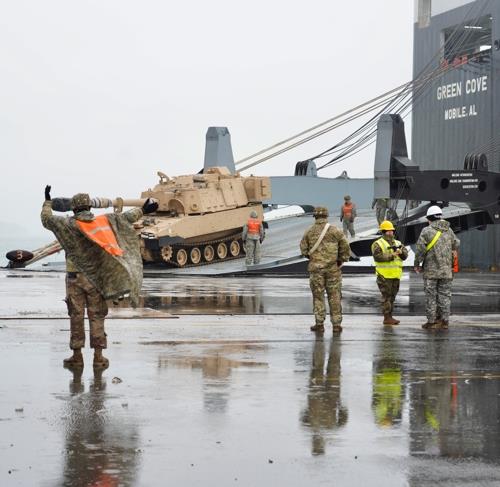