SEOUL, Feb. 13 (Yonhap) -- South Korea's top court on Thursday ordered a review of a ruling that handed down jail terms to ex-presidential aides over their roles in a power abuse scandal in which pro-government organizations were favored during the conservative Park Geun-hye administration.

An appeals court sentenced Kim to 18 months in prison for power abuse in the so-called "white list" scandal. The court handed down a 12 month prison term, suspended for two years, to Cho.

On Thursday, the Supreme Court ordered the Seoul High Court to review its earlier ruling, saying the duo's request to the business lobby group did not constitute a threat.

"Testimonies by FKI officials are subjective and merely show they felt pressured," the court said, indicating the request was not something that limited their decision-making freedom.

The Supreme Court's decision comes two weeks after the top court ordered the appeals court to also review its ruling on another case, known as the "blacklist" scandal.

In the blacklist scandal, Kim and Cho were alleged to have kept a secret register and disadvantaged artists who appeared critical of the conservative president.

The two served as key aides to Park, who was impeached in March 2017 on allegations that she and a close friend abused their power and received billions of won in bribes from top conglomerates. 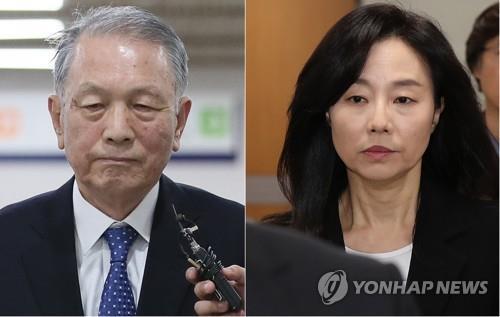