SEOUL, Feb. 13 (Yonhap) -- Foreign Minister Kang Kyung-wha said Thursday she expects to discuss the ongoing defense cost talks between South Korea and the United States if she meets one-on-one with her U.S. counterpart, Mike Pompeo, on the margins of a security conference in Germany.

Kang made the remark to reporters as she headed to Germany for the Munich Security Conference slated for a three-day run through Sunday. She is expected to hold a series of bilateral meetings, including one with Pompeo, on the sidelines.

"The time has not been fixed yet. If there is a chance, I expect to go over pending issues. We have a lot to discuss, including the current status of the SMA negotiations and the situation on the Korean Peninsula," Kang said of a possible meeting with Pompeo at Incheon International Airport, west of Seoul.

The Special Measures Agreement (SMA) refers to the defense cost-sharing deal between Seoul and Washington. The two sides have held a series of talks to determine how much Seoul should pay for the upkeep of some 28,500 American troops stationed in the South, but no deal has been reached yet.

The sides have haggled over Washington's demand for a sharp increase in Seoul's share. 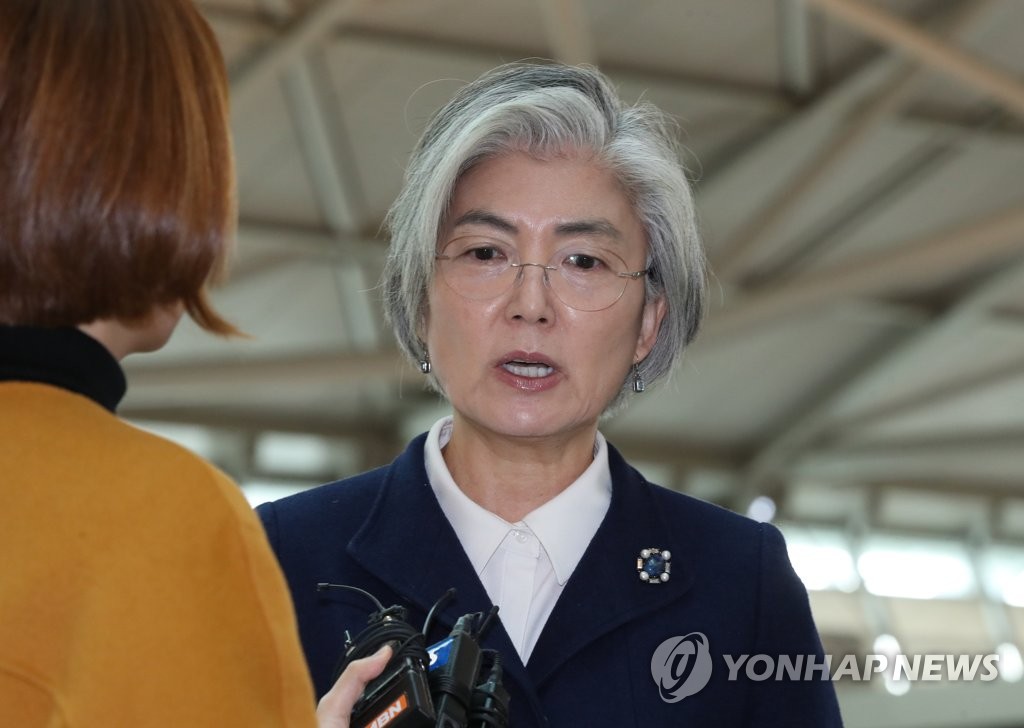 "Deputy Secretary Biegun is playing a leading role, and the U.S. is sharing its stance with us through various channels that it is always ready for talks with North Korea on various occasions," she said. "So we should not be worried about a vacuum in their work due to the reshuffle."

Earlier this week, the White House announced that President Donald Trump plans to nominate Alex Wong, deputy special representative for North Korea, as a representative to the United Nations,

The announcement spurred concern that the State Department team working on North Korea is unraveling as it came after the U.S. special envoy for North Korea, Mark Lambert, was also assigned to a new role last month and Special Representative for North Korea Policy Stephen Biegun has been promoted as deputy secretary.

On the sidelines of the multilateral gathering in Munich, Kang is looking to hold a series of two-way talks with her foreign counterparts, including Pompeo and Japanese Foreign Minister Toshimitsu Motegi, and possibly a trilateral meeting with the top two diplomats.