SEOUL, Feb. 14 (Yonhap) -- Veterans Affairs Minister Park Sam-deuk will visit the United States and Canada next week to discuss cooperation in memorial projects for Korean War veterans on the occasion of the 70th anniversary of the outbreak of the conflict, his office said Friday.

While in the U.S., Park will deliver 2 billion won (US$1.69 million) to fund the establishment of a memorial wall in Washington to "convey sincere appreciation to the ultimate sacrifice of U.S. veterans who fought in the Korean War."

The wall will be built in West Potomac Park, where the Korean War Veterans Memorial is located, with the names of some 36,000 American veterans who fought in the 1950-53 war etched on it.

The ministry plans to provide more funds for the estimated $25 million project next year when the design of the structure is finalized, it said.

President Moon Jae-in said last year the memorial wall will be established by 2022 to "honor the noble sacrifices of each and every fallen U.S. Korean War veteran and help the sublime value of the alliance" between the two countries become "deeply etched on the hearts of both peoples." 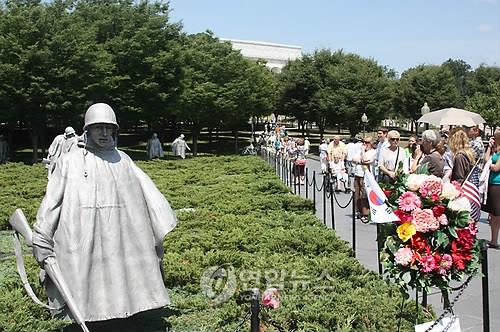