SEOUL, Feb. 14 (Yonhap) -- South Korean President Moon Jae-in is apparently seeking another summit with U.S. President Donald Trump in the coming weeks or months, but there's still a question mark on the feasibility.

The position of Moon's office Cheong Wa Dae is rather simple: the more often, the better when it comes to meetings between the leaders of the allies.

Moon's aides have floated the idea of Moon traveling to Washington, D.C. in the first half of the year, according to a government source.

There's no major international event to bring Moon and Trump together for the time being.

Asked about whether there could be a chance for them to meet each other before July, the source said on the condition of anonymity, "(We) will try to make it (happen)."

Moon and Trump had their previous summit, the ninth between them, in September last year on the sidelines of the United Nations General Assembly. 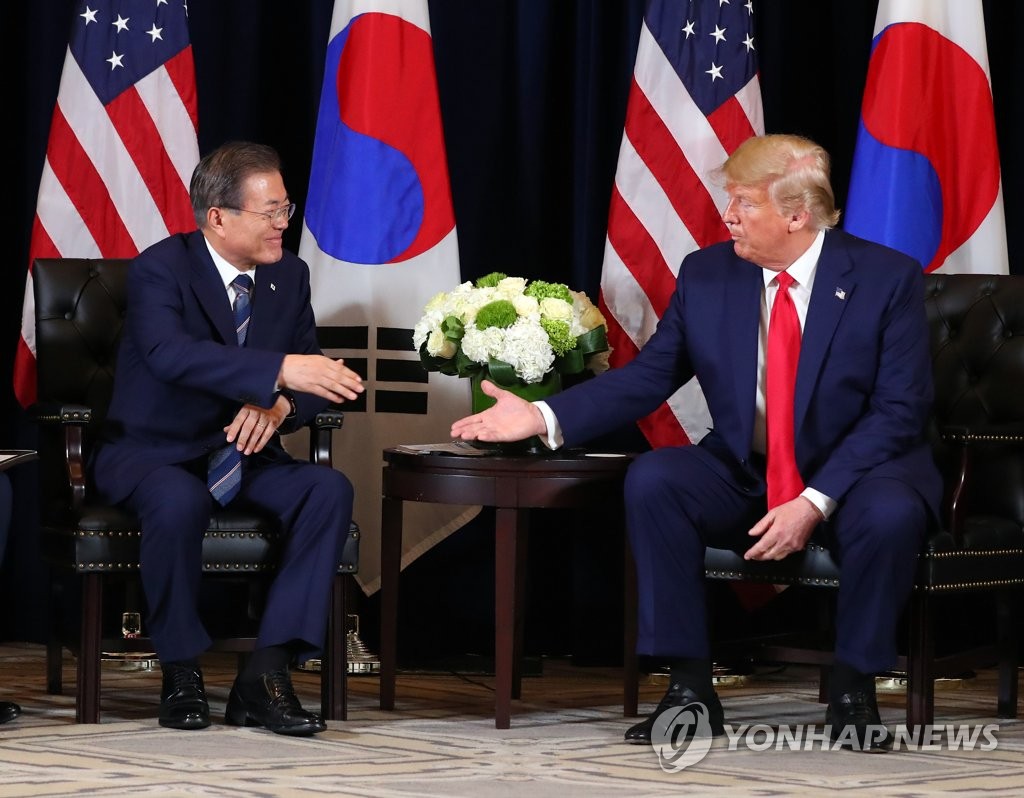 Moon had a plan for talks with Trump during the Asia-Pacific Economic Cooperation (APEC) summit in Chile that was supposed to take place last November, but the session was canceled amid social unrest in the country at that time.

South Korean officials agree on the need for the two to meet each other again at an early date, if possible.

The Moon administration has stated it would resume efforts in earnest to revive inter-Korean economic projects that could be immune from international sanctions on Pyongyang.

The move requires close consultations with Washington and its understanding. The two sides have yet to complete prolonged negotiations on sharing defense costs.

Seoul also wants to revise a set of guidelines, based on Washington's consent, on its rocket development program.

Cheong Wa Dae is reportedly quickening its push for a Moon-Trump summit apparently in consideration of the April 15 general elections here.

It "has recently delivered its intent on holding a South Korea-U.S. summit to the U.S. side on various levels," the Chosun Ilbo daily reported, quoting an unidentified government source.

The daily also cited a diplomatic source as saying that the approval ratings of the president and the ruling party tend to rise after summit diplomacy.

It added that's among the reasons why Cheong Wa Dae is pushing for a Moon-Trump summit to be held in March.

A Cheong Wa Dae official said the news report is "not true," adding he has talked about it with the National Security Office, which is in charge of summit-related issues.

He expressed displeasure with local media reports, mostly by conservative ones, that "intentionally" link Cheong Wa Dae's handling of diplomatic and national security affairs with domestic politics, mentioning the upcoming elections in particular.

What seems to be certain, nonetheless, is that Moon wants to meet Trump before too long.

What's in Trump's mind is unclear. Observers say he has lost interest in the North Korea issue.

He made no mention of North Korea in his Feb. 4 State of the Union Address. According to CNN, Trump told his foreign policy advisers that he does not want a meeting with North Korean leader Kim Jong-un ahead of the November presidential poll.

In April last year, Moon flew to the U.S. capital for summit talks with Trump on a relatively short notice.

The current situations are different from then, a source said.

At that time, Trump was more eager to meet Moon following a no-deal Hanoi summit with Kim and lingering enthusiasm on nuclear talks with North Korea. Moon's leverage and room for maneuvering over the Korean Peninsula issue has also diminished amid chilly ties between the two Koreas.