SEOUL, Feb. 14 (Yonhap) -- One of Samsung heir Lee Jae-yong's most trusted aides was questioned by prosecutors Friday about suspicions surrounding the top conglomerate's controversial merger of two leading affiliates in 2015.

Chung Hyun-ho, president of Samsung Electronics' business support task force, was called in by the Seoul Central District Prosecutors Office in the morning to face questioning about the Samsung management's decision-making process in the merger of Samsung C&T Corp. and Cheil Industries Inc. five years ago.

The 60-year-old Chung, who had previously served in Samsung's now-disbanded control tower Future Strategy Office, reportedly cemented his relations with Lee, currently vice chairman of Samsung Electronics, while they studied together in the United States in the 1990s. 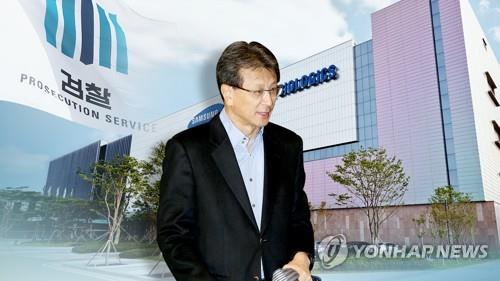 Prosecutors think Samsung's top management may have intentionally lowered the value of Samsung C&T prior to its merger with Cheil Industries to help benefit Lee Jae-yong.

Lee was the largest shareholder in Cheil Industries, an affiliate that produces textiles, chemicals and electronic chemical materials, with a stake of 23.2 percent, which means a fall in the valuation of Samsung C&T paves the ground for a merger ratio advantageous to the Samsung heir.

In a related move, prosecutors have nearly completed their investigations into suspected window dressing by Samsung BioLogics in 2015, allegedly orchestrated by Samsung Group to overvalue Cheil's stake in the conglomerate's bio business. Through the merger, Lee was able to secure control of Samsung C&T, a de facto holding company of Samsung Group.