SEOUL, Feb. 14 (Yonhap) -- While the South Korean film "Parasite"'s historic Oscar triumph gives the film a bump at international box offices, its soundtrack album is also benefiting from the boost.

Streaming of the "Parasite" album skyrocketed 11 fold on Monday on local online streaming service Genie Music, compared with the previous day, according to Genie.

Over the following days, streaming of the "Parasite" soundtrack album jumped to record 14-fold and 16-fold growth on Tuesday and Wednesday, respectively, compared with last Sunday, Genie said.

"Movie soundtracks usually see their streaming demand rise along with the release and ascent of a movie. Given that, (the 'Parasite' album) marks a very rare case whose streaming skyrocketed due to award wins," an official at Genie noted.

"As 'Parasite' caught the attention of audiences nationwide, they are turning their eyes to the original soundtracks," the official said.

On Monday (U.S. time), Spotify said on its Twitter account that "After the (Oscars) show, all ears were on the film's music: Streams of 'Parasite' (Original Motion Picture Soundtrack) soared more than 1,400 percent on Spotify after the film won Best Picture."

Produced by South Korean musician Jung Jae-il, the album carries 25 tracks, including the final track ""A Glass of Soju," sung by Jung and Choi Woo-sik, a "Parasite" actor.

It was initially one of the fifteen songs that advanced in the original song category for the 92nd Academy Awards.

"A Glass of Soju" was the most streamed track of the "Parasite" soundtrack with its streams jumping 15 fold on Tuesday, compared with Sunday, the day before the Oscar victories by "Parasite." 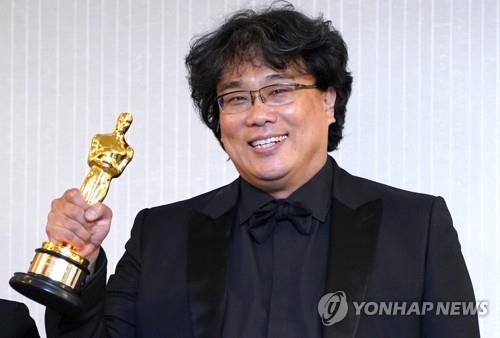