Hong made the remarks in a meeting with Bank of Korea Gov. Lee Ju-yeol on Friday to discuss how to cope with the economic impact of the virus, which was recently named COVID-19.

Hong also urged people to carry out "normal economic activities," saying private consumption was hit by the spread of the virus.

It was the first time the two men have met since August last year, when they discussed measures to deal with Japan's export curbs of key materials targeting South Korea.

The market had been increasingly betting that the central bank could cut its key rate at its policy meeting on Feb. 27 to preemptively cope with the economic fallout of the virus.

However, Lee voiced caution against lowering the key rate this month, citing the difficulty of gauging how broadly the virus will spread.

Lee told reporters that he did not discuss a possible rate cut with Hong during the meeting. 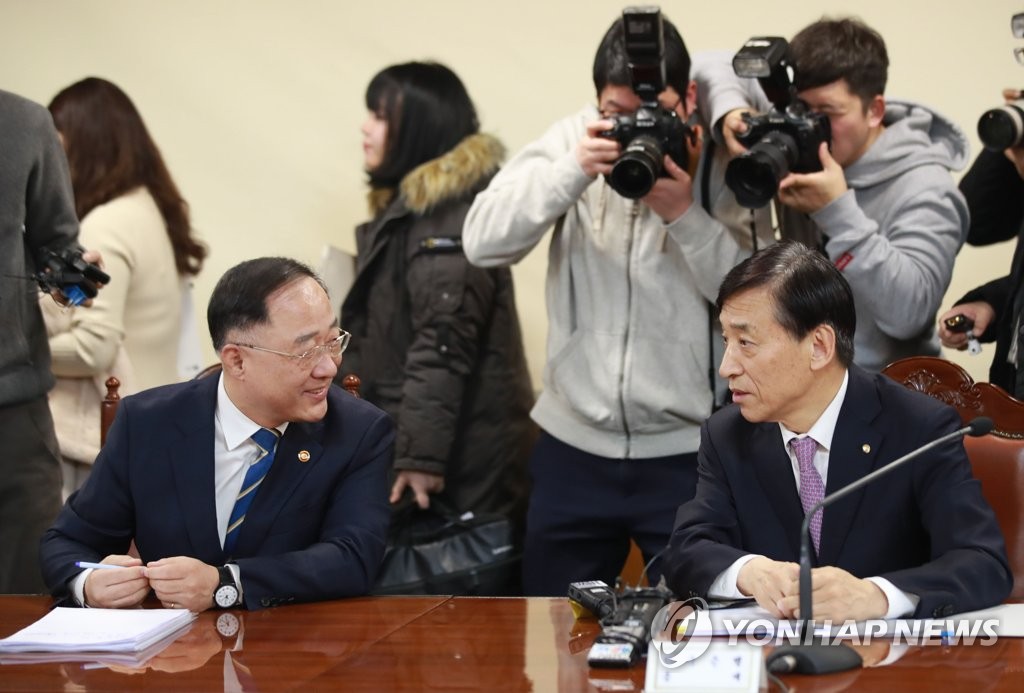 Although the virus shows no signs of abating, Hong said it is "not appropriate" for the government to consider revising down this year's growth target of 2.4 percent.

Hong urged people not to be too cautious and to go on with everyday activities, as the government has been working on the full control of the disease, including infection prevention.

Hong said the government will swiftly come up with additional measures to help cushion local firms from the economic impact of the virus.

South Korea has so far reported 28 confirmed cases of the virus, but the number has remained unchanged since Tuesday. Seven of the diagnosed patients have been released from quarantine after fully recovering.

The government will also provide loans worth 25 billion won with a lower interest rate to small and medium-sized companies.

Financial market volatility had increased due to the spread of the virus, but it has recently shown signs of stabilization, Hong said.

"The government will stay alert to increasing volatility in financial markets, while making our contingency plans ready," Hong said.