SEOUL, Feb. 14 (Yonhap) -- The head of South Korea's central bank said Friday the country will continue to maintain ample liquidity to help minimize the fallout from the outbreak of the new coronavirus amid growing market expectations for a rate cut down the road.

"I believe now is the time when we need everyone's efforts to minimize the impact of this crisis," Bank of Korea (BOK) Gov. Lee Ju-yeol told a Seoul meeting hosted by Finance Minister Hong Nam-ki to review the impact of the outbreak.

"To this end, the Bank of Korea is working to come up with specific financial support for the service industry, which is suffering from a reduced number of foreign visitors and (reduced) local spending, and manufacturing businesses that are facing difficulties due to a shortage of materials and parts from China," he told the meeting.

"Also, the BOK plans to continue enough liquidity in the market so that businesses can secure sufficient funds, and the temporary demand for funds will not lead to increased costs in that process." 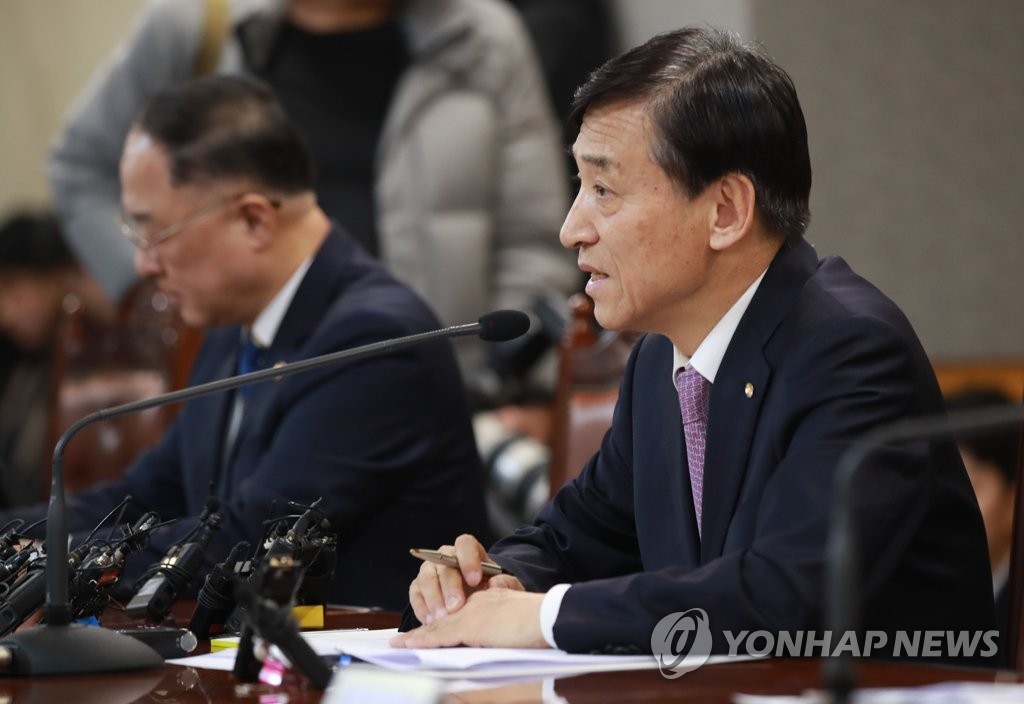 Lee's remarks come less than two weeks before the BOK's monetary policy board holds its rate-setting meeting on Feb. 27.

The base rate has been kept frozen at 1.25 percent since October, when the seven-member board slashed the base rate by a quarter percentage point in its second rate reduction in just three months.

The board had widely been expected to stand pat on the policy rate for the time being, but the outbreak of the COVID-19 virus has apparently prompted many to expect a rate cut in the near future.

The South Korean economy was earlier estimated to grow 2.3 percent this year, slightly rebounding from a 2.0 percent on-year expansion last year that marked the slowest growth for Asia's fourth-largest economy since 2009.

Many have already slashed their growth outlooks for South Korea.

JP Morgan has lowered its 2020 growth outlook to 2.2 percent from the previous 2.3 percent, while many others, including the state-run Korea Development Institute, believe the country's economic growth may slow to as low as 2.0 percent.

Lee, however, said keeping ample liquidity did not automatically mean a rate reduction, calling it a "different issue."

"We need a process of checking (actual conditions) through indicators. With regard to a rate reduction, there are good effects but also side effects and therefore we must make a careful decision by considering both," he told reporters after the meeting.

South Korea has so far reported 28 confirmed cases of the COVID-19, but the number has remained unchanged since Tuesday. Seven of the diagnosed patients have been released from quarantine after fully recovering.