SEOUL, Feb. 15 (Yonhap) -- The top diplomats of South Korea, the United States and Japan are set to hold trilateral talks on the margins of a security forum in Germany on Saturday, amid joint efforts to resume dialogue with North Korea and promote stability in the Middle East.

Foreign Minister Kang Kyung-wha and her U.S. and Japanese counterparts -- Mike Pompeo and Toshimitsu Motegi -- will meet in the morning on the sidelines of the annual three-day Munich Security Conference in Munich, which will run through Sunday.

The three are expected to exchange views on cooperation in resuming stalled nuclear negotiations with Pyongyang and addressing tensions in the Middle East, which stemmed from confrontation between the U.S. and Iran.

They could also discuss ongoing efforts to contain the spread of the COVID-19 virus, which has not only posed health risks to their citizens but also caused disruptions to global supply chains that are feared to chip away at the global economy. 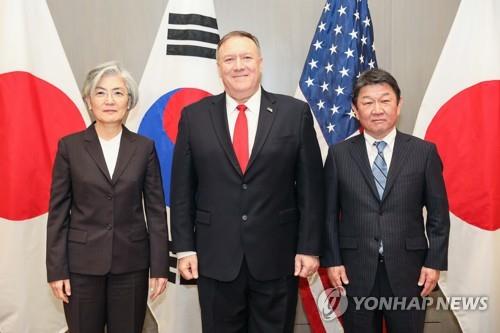 Also in Munich, Kang and Motegi will hold bilateral talks to discuss a wide range of pending issues, including joint efforts to address a protracted row over Japan's export restrictions and its wartime forced labor.

Kang and Motegi could also touch on the issue of 14 South Koreans currently aboard a Japanese cruise ship in Yokohama, which was quarantined earlier this month after the coronavirus was detected in a person who disembarked from the ship in Hong Kong last month.

Kang and Pompeo could also meet bilaterally, though their meeting schedule has yet to be finalized.

If their talks take place, the two sides may discuss ongoing negotiations over the sharing of the cost for stationing 28,500 American troops in South Korea.

They could also discuss Seoul's push for individual trips to the North and other inter-Korean cooperation projects as part of efforts to enhance cross-border relations and help resume stalled nuclear talks between Washington and Pyongyang.