SEOUL, Feb. 14 (Yonhap) -- A longtime friend of jailed former President Park Geun-hye was sentenced to 18 years in prison in a retrial of her corruption case at a Seoul appellate court on Friday.

The Seoul High Court commuted its jail sentence for Choi Soon-sil, who was known as Park's confidante during her presidency from 2013 to 2017, from the previous 20 years to 18 years in the retrial, which was ordered by the Supreme Court last August.

In February 2018, Choi was sentenced by the same Seoul appellate court to 20 years in prison, a fine of 20 billion won (US$16.9 million) and a forfeit of 7 billion won for a string of corruption charges linked to a massive influence-peddling scandal that forced Park from office in early 2017. 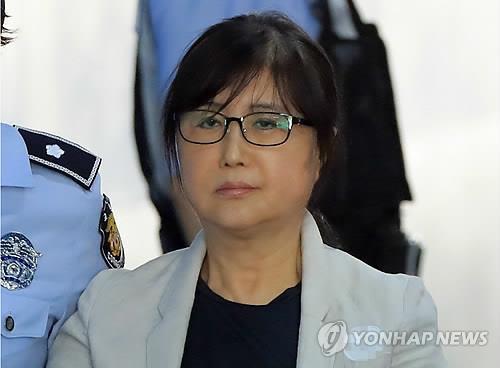 The 64-year-old Choi was convicted on charges of exploiting her ties with the former president and forcing 50 business conglomerates to pay a combined 77.4 billion won to two nonprofit foundations she controlled. She allegedly meddled in various state affairs and gained access to confidential government files even though she held no official position or authority in the Park government.

But the Supreme Court sent Choi's case back to the Seoul High Court in August last year, saying she should be considered not guilty of some of the coercion charges.

In the previous retrial hearing last month, prosecutors demanded a prison term of 25 years, a fine of 30 billion won and a forfeit of 7.05 billion won.

Throughout her retrial, Choi pleaded not guilty, arguing that all the charges were fabricated under the pressure of public opinion.

In its new verdict, the Seoul High Court reduced her jail term by two years and slashed her forfeit to 6.3 billion won, while keeping her fine unchanged.

The corruption scandal surrounding Choi was brought to light in October 2016 when local cable network JTBC unveiled her tablet PC, indicating that she had meddled in state affairs using her ties with Park.

Park allegedly allowed Choi to gain access to drafts of presidential speeches and edit them, some of which were classified as confidential.