SEOUL, Feb. 14 (Yonhap) -- Three minor opposition parties announced a plan to merge Friday in a widely expected move that comes two months before the April 15 general elections, paving the way for them to become the third-largest political bloc in South Korea in terms of parliamentary seats, at least for now.

The Bareunmirae Party (BMP) and the Party for Democracy and Peace (PDP) agreed to be united with the New Alternative Party, which has seven lawmakers. They decided to name their new grouping the "Democratic Unity Party," translated into English. Its official English name has not been announced yet.

The BMP is composed of 17 lawmakers and the PDP has four National Assembly seats.

This will give the new party 28 parliamentary seats when the merger, slated for next Monday, takes effect. Even if seven lawmakers known to be loyal to Ahn Cheol-soo, a former presidential candidate who is moving to create a new party, leave the merged party, it would still be able to create a formal negotiating body on the floor of the country's unicameral parliament. At least 20 lawmakers are required for a party here to have such negotiating power. 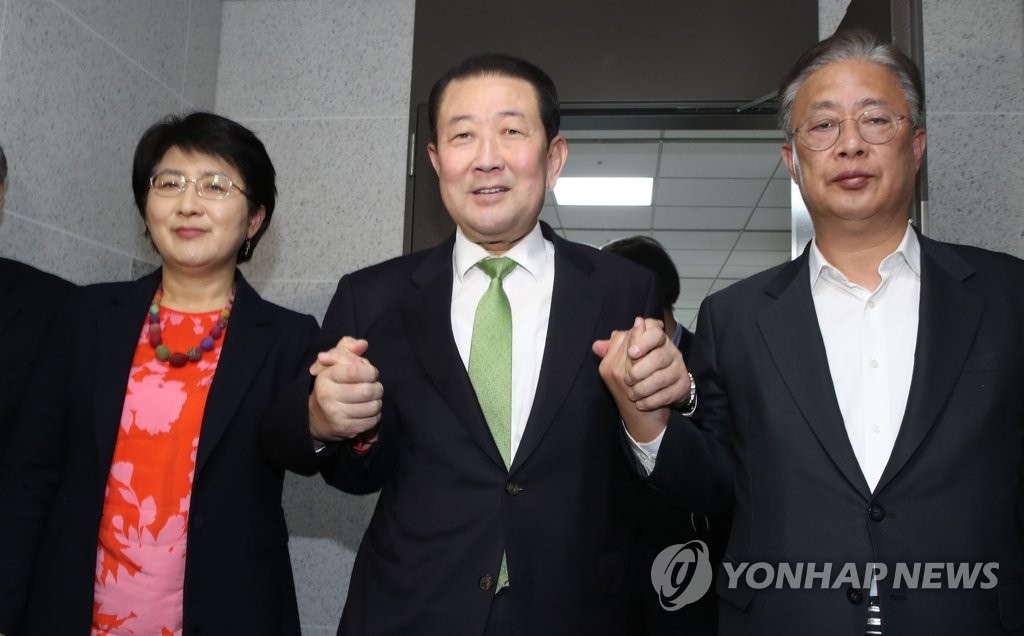 Members of new party, many of whom were elected largely on support from voters in the southwestern provinces of North and South Jeolla four years ago, would be able to join bargaining on the demarcation of election districts to be held during a provisional session of the National Assembly to open next week.

The party would be headed by three co-leaders: Sohn Hak-kyu of the BMP, Rep. Chung Dong-young of the PDP and Rep. You Sung-yop of the New Alternative Party.

The fate of the united party remains uncertain, however, as President Moon Jae-in and the ruling Democratic Party (DP) have been drawing overwhelming support from voters in Gwangju and South and North Jeolla, which are traditional strongholds of the nation's liberal forces, unlike four years earlier.

Some observers expect the newly merged party to seek an election coalition with the DP.