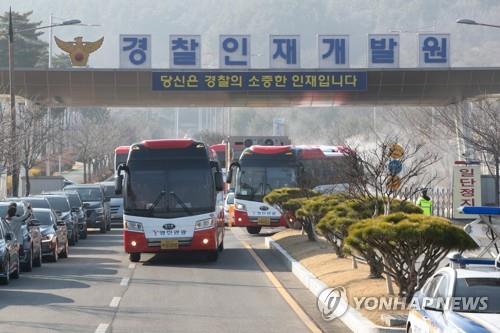 The government, meanwhile, said it will release another 333 people who were flown in on Feb. 1 and a non-evacuee who has been there to take care of his two children, on Sunday as planned.

"All people in the second group have tested negative for the virus and will be released," Vice Health Minister Kim Gang-lip said.

He added that besides the evacuees, 95 government officials and medical workers who have stayed with the people from China have also been found to be uninfected.

The official said that all people leaving the quarantine facilities will be offered temporary residences and employment if they need it. They will also be eligible for counseling services so they can better adjust to normal everyday life.

"The government has provided each person with a information booklet on what kind of services they can receive from local administrations," Kim said.

The government arranged for buses to transport all evacuees to major locations near their homes or the place they want to stay.

All facilities that have been used by the evacuees will undergo extensive disinfection in the coming days with personal items left behind to be disposed of according to protocol.