SEOUL, Feb. 15 (Yonhap) -- South Korea's government said Saturday that it is not considering changing the country's alert level for the novel coronavirus just because no new cases have been reported in the last four days.

The country has reported 28 confirmed cases since Jan. 21, with seven people being released from hospitals after making full recoveries. All infected people are in stable condition with none in any kind of danger.

In a regular press conference held in Sejong City, 130 kilometers south of Seoul, Vice Health Minister Kim Gang-lip said that the government is carefully monitoring all developments in regard to the COVID-19 virus inside the country, as well as in foreign countries.

"It is very fortunate that there have not been any new cases in South Korea but new cases coming out of China require utmost attention," Kim said. China, which reported the first case in late 2019, has confirmed over 1,500 deaths and more than 66,000 infections.

South Korea raised its alert level from "yellow" to "orange" on Jan. 27 after four cases were reported in the country. An orange level alert is issued if there is limited domestic transmission.

He said that Seoul also needs to be mindful that with rise in movement of people in China following the long Lunar New year holiday, and incidents coming out of Japan, where health authorities are unsure of how transmission occurred, it is best if the country remains on guard.

The official added that policymakers are concerned about the steady spread of COVID-19 in places like Hong Kong and Southeast Asian countries that maintain close contact with South Korea and there is a lot of movement of people.

Kim then said that while Seoul is keeping close tabs on Japan, it is difficult to determine if that country can be classified as a "contaminated country" at present.

Japan said earlier that an 80-year-old woman who was thought to have died of pneumonia had in fact been infected with the novel coronavirus. The deceased had not been to China or traveled abroad, raising concerns of unknown person-to-person transmission in the country. 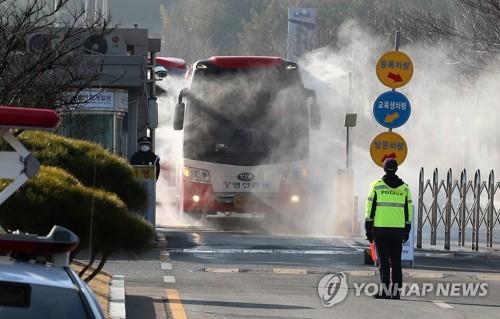