TOKYO/SEOUL, Feb. 15 (Yonhap) -- South Korea on Saturday stepped up efforts to support its 14 citizens aboard a quarantined cruise ship moored off the coast of Japan by sending them food, hygiene products and other commodities and checking their status.

The Koreans -- nine passengers and five crew members -- have remained inside the Diamond Princess since the ship was quarantined at Yokohama Port earlier this month after confirming an infection of COVID-19.

Yoon Hee-chan, the Korean consul general in Yokohama, delivered the second batch of items, including the fermented staple Korean side dish kimchi, instant noodles and soaps, to employees of the ship operator.

"As we have received requests (from the Korean passengers), we have prepared them," Yoon said. "We plan to provide more to them until Feb. 19, the date when they are scheduled to be released from quarantine." 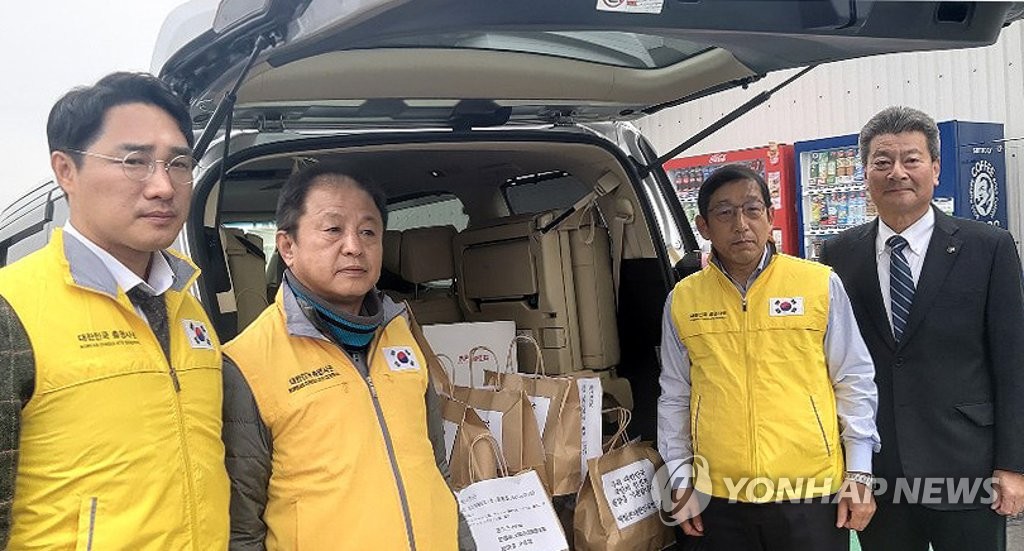 Currently about 3,400 people from more than 50 countries are aboard the ship, with hundreds of former passengers having disembarked due largely to old age or being infected with the novel virus.

Most of the remaining passengers have received necessities individually from their families or acquaintances.

The consul general pointed out that his mission has been checking the 14 Koreans twice a day and that none of them has shown signs of illness.

Following a news report that the U.S. will evacuate Americans aboard the ship who want to return home, speculation has emerged that South Korea could also consider doing likewise for its citizens.

A source told Yonhap News Agency that Seoul is weighing ways to transport the Korean passengers to South Korea if they want. But a foreign ministry official later said that there is no specific evacuation plan yet.

"Regarding the transportation of the passengers to Korea, we have no specific plan at this point," the official said, noting that there are no suspected cases of the virus among the Koreans on the vessel.

"The South Korean Embassy in Japan and the Consulate General in Yokohama plan to provide consular assistance through such efforts as constantly contacting them and offering conveniences," he added.