SEOUL, Feb. 16 (Yonhap) -- South Korean star Park In-bee picked up her 20th career LPGA victory in Australia on Sunday, resuming her pursuit of an Olympic spot and a chance to defend her gold medal.

The LPGA Hall of Famer captured the ISPS Handa Women's Australian Open by three strokes over Amy Olson of the United States at 14-under 278. Park shot one-over 74 in the final round at Royal Adelaide Golf Club in South Australia.

She is the second straight South Korean champion this season, following Park Hee-young's victory at the ISPS Handa Vic Open.

Park entered the final round holding a three-stroke lead over Cho A-yeon at 15-under. Cho, the 2019 Korea LPGA Tour Rookie of the Year, played in the final group for the second straight week. At the Vic Open, Cho took a one-stroke lead into the final round but shot a disastrous 81 to finish tied for 16th. 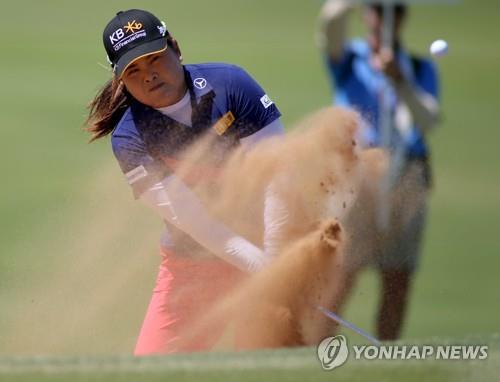 This week, Cho had another painful final round, scoring four-over 77, and shared sixth place at 8-under 284.

Park In-bee is now the 28th golfer in LPGA history to reach the 20-win plateau and the second South Korean after Pak Se-ri to do so. The world No. 17 should crack top 15 in the rankings and once again position herself to make the national team for the 2020 Tokyo Olympics.

The Olympic field will feature 60 golfers, and those inside the top 15 in the rankings at the end of June will automatically qualify. But there is a limit of four players per country, and South Korea, boasting the deepest talent pool in women's golf, currently has five players inside the top 15: Ko Jin-young (No. 1), Park Sung-hyun (No. 2), Kim Sei-young (No. 6), Lee Jeong-eun (No. 9) and Kim Hyo-joo (No. 12), leaving Park In-bee, the 2016 Olympic champion, on the other side looking in.

In a bid to crack the top 15, Park, who opened the season at No. 16, started her season at the season-opening Diamond Resorts Tournament of Champion in January. It was her earliest start to a season in four years.

Park lost in the playoff in that tournament and then missed the cut in her next two starts, falling to No. 17 as a result.

While Sunday's win certainly helps Park's cause, she will still likely have two players to leapfrog when the rankings are updated on Monday.

The world rankings award points based on the strength of the field and evaluate players' performances over a rolling two-year period. An extra emphasis is placed on results from the 13 most recent weeks.