SEOUL, Feb. 16 (Yonhap) -- A North Korean propaganda outlet mentioned for the first time South Korea's push to allow its citizens to travel to the communist nation on an individual basis, accusing Seoul of trying to win U.S. approval for the initiative.

Seoul has been working on the idea of individual trips since President Moon Jae-in cited it last month as a possible cross-border project that could be pursued to expand exchanges and cooperation with the North without violating international sanctions on Pyongyang.

"South Korean officials are hustling to beg a foreign country to solve the inter-Korean tensions," the media outlet said, pointing to a recent visit by deputy national security advisor Kim Hyun-jong to the U.S. that has raised speculation the issue of individual tours was discussed with officials there.

The outlet also accused the South of "trying to get approval of the proposal from its superior, the U.S."

"It is our nation that has the most at stake and the ability to solve the problem," the outlet said.

The idea of individual tourism to North Korea emerged last year as a "creative" alternative to the long-suspended tour project at Mount Kumgang on the North's east coast, after the North threatened in October to end the project. It was suspended in 2008, when a South Korean traveler was shot dead near the resort. 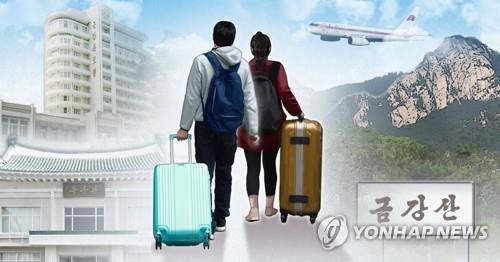