SEOUL, Feb. 16 (Yonhap) -- Thae Yong-ho, a high-profile North Korean defector, said Sunday he will run in April's parliamentary elections under a different name, one that he has used in his passport and all other official documents to evade Pyongyang's tracking since his 2016 defection.

Thae, a former No. 2 diplomat at North Korea's Embassy in London, said he deliberately registered a false name, Thae Gu-min, and a false date of birth with the government after defection so as to make it harder for the North to track him down and harm him.

So far, however, he has carried out various public activities in South Korea with his original name.

Thae, who joined the main opposition Liberty (LKP) earlier this month to run for the National Assembly in April's elections, said he tried to file for a name-change for the elections, but decided to run under the false name because the name-change process takes more than three months.

"On the occasion of the elections, I've sought to regain my real name on my resident registration. But the court said it takes three months, which means changing the name (to Yong-ho) is impossible before April. This is why I have to go with my registered name," Thae said.

Noting that the adopted name means saving people, Thae said he "will meet new challenges confidently while trusting the government despite mounting difficulties in securing personal safety and security."

"I hope my bid serves as a basis for peace and the reunification of the Korean Peninsula, as well as for the growth and prosperity of our community," Thae added. 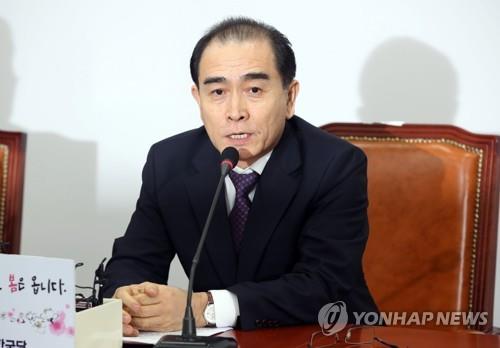