According to the image of the tracklist posted on the website of the band's agency, Big Hit Entertainment, the upcoming album, "Map of the Soul: 7," set for official release Friday, has 20 tracks.

The fourth full-length album by BTS comes with 15 new songs plus five hit songs from its previous EP, "Map of the Soul: Persona."

"Black Swan," "Interlude: Shadow" and "Outro: Ego," which were prereleased in the runup to the official release, will be some of the new songs, as well as "Filter," "Louder than bombs," "UGH!" "OO:OO (Zero O'Clock)," "Inner Child," "Respect" and "We are Bulletproof: the Eternal," as well as "ON." 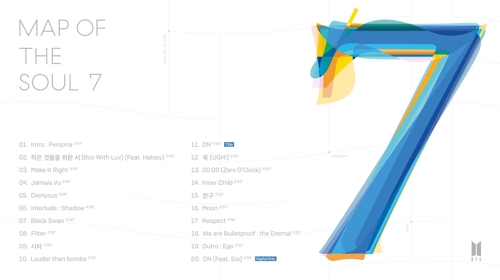 The tracks from "Persona" include "Boy With Luv," featuring Halsey, "Make It Right," "Dionysus" and "Jamais Vu."

On the sidelines of the album release, BTS will separately drop a digital version of "ON," featuring Sia, according to Big Hit.

The collaboration was arranged after Sia "willingly accepted" BTS' proposal for the joint work, Big Hit said. The digital song will be released on global platforms Friday for North American promotion before officially hitting the online music stores at the band's home country of South Korea on Feb. 28, it said.

Another Australian pop star, Troye Sivan, also participated in the composition of "Louder than bombs," according to Big Hit.

A "kinetic manifesto film" matching the main track "ON" will also be unveiled, along with the official worldwide release of "Map of the Soul: 7," at 6 p.m. on Friday, according to Big Hit.

As the second leg of BTS' "Map of the Soul" album series, inspired by the theories of Swiss psychiatrist Carl Gustav Jung, "7" has 20 tracks, the most in the band's seven-year career.

Prereleasing "Black Swan" last month, Big Hit said the song deals with BTS' exploration of their deep inner selves as artists, continuing on the broader theme of exploring one's ego in the "Map of the Soul" album series.

The debut performance of "ON," meanwhile, is scheduled for "The Tonight Show Starring Jimmy Fallon," a U.S. late night show, on Feb. 24 (U.S. time).

With the new album, the band is gearing up to make another round of major pop history, having won three No. 1s on the Billboard 200 within the span of one year as the first band since the Beatles.

Preorders for the new album, which began in January, topped 3.42 million copies in the first week, accounting for the biggest preorder volume ever for a South Korean album.

Keywords
#BTS Map of the Soul: 7 tracklist
Issue Keywords
Most Liked
Most Saved
Most Viewed All Categories
Most Viewed More
Most Viewed Photos