In a Facebook post updated on Friday, the UNC said its staff attended a director-level meeting of the U.N. Mine Action Service (UNMAS) in Geneva last week and engaged with international mine action groups to discuss "support to President Moon Jae-in's vision for demining efforts in the DMZ."

Last year, Moon proposed the transformation of the DMZ into an international peace zone as part of efforts to promote peace on the peninsula and suggested that U.N. member states take part in eliminating about 380,000 anti-personnel mines laid in the zone.

In his address at the U.N. General Assembly in September, Moon noted that cooperation with the international community including UNMAS will expedite the removal work, which is expected to take 15 years if conducted by South Korean troops alone, and will have greater significance for creating the "international" peace zone.

During the meeting, the officials also provided an update on operations to recover war remains inside the DMZ, according to the UNC.

South Korea has carried out operations to remove mines and recover the remains of soldiers killed during the 1950-53 Korean War inside the DMZ in cooperation with the UNC.

After the 2018 inter-Korean agreement for a joint excavation project inside the zone, the two Koreas removed mines and explosives as preliminary steps. But North Korea has not been responsive to the South's call for an official launch of the project, leading Seoul to do it alone. 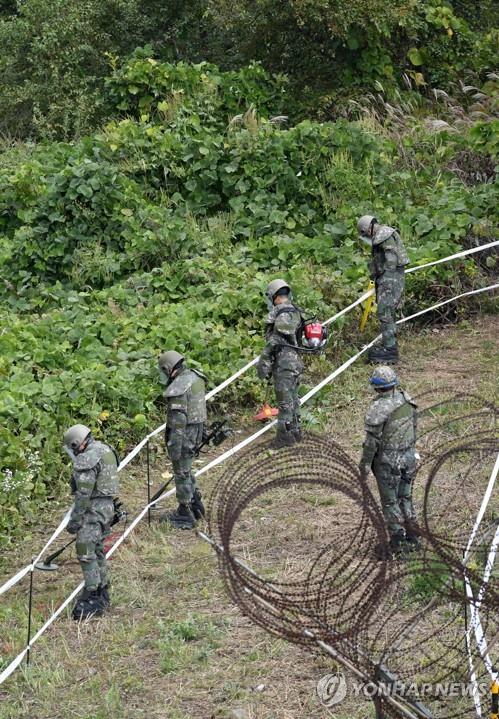