SEOUL, Feb. 17 (Yonhap) -- Seoul received the largest single-day snowfall of the season on Monday as up to 4.1 centimeters of snow fell in the capital, the Korea Meteorological Administration (KMA) said.

Along with the snowfall, the morning temperature plunged to minus 5.5 C in Seoul, the KMA said, adding that the wind chill made it feel around minus 10.5 C. The agency said Seoul's daily low temperature will further fall to minus 8 C on Tuesday.

The first snow of the season was witnessed in Seoul on Nov. 15 last year, but the amount was too small for snow to accumulate. Further small amounts of snow fell in the capital on Dec. 7 last year and Jan. 1 this year. 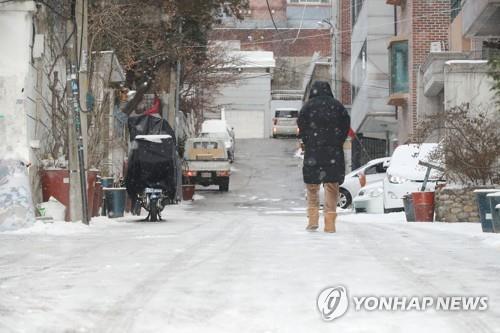 The reduced snowfall in Seoul and most other parts of the nation occurred alongside frequent spells of unseasonably warm weather this winter. Indeed, southern coastal regions last month recorded their highest January daily lows of 10.3 C, with Jeju Island's morning low surging to 18.5 C.

KMA officials said some of the snow that fell in Seoul early in the morning started to melt, reducing the volume of accumulated snow to 3.2 cm as of 9 a.m. Along with Sunday's fall, snow on the ground was 4.9 cm at 9 a.m. in Seoul, they said.

They added that snow was still falling in all parts of the country except eastern coastal regions and some Gyeongsang provincial areas on Monday morning, under the influence of snow clouds created by temperature differences between the lower atmosphere and the Yellow Sea's surface.

Ulleung Island in the East Sea received 29 cm of snow, while snow accumulation reached 5.7 cm in Gwangju and 5.5 cm in Jeonju.

Snow warnings or alerts have been issued for a number of regions nationwide, including Jeju Island, Ulleung Island, Gyeonggi Province and Chungcheong and Jeolla provinces, the agency said, adding snow will stop in Seoul and Gyeonggi at around 3 p.m.

On the other hand, snowfall will continue until early Tuesday morning in Jeju and Jeolla provinces.