SEJONG, Feb. 17 (Yonhap) -- South Korea's finance ministry said Monday it will draw up additional measures to preemptively contain the economic impact of the novel coronavirus, which is expected to threaten the fragile Chinese and global economies.

In a policy report to President Moon Jae-in, the Ministry of Economy and Finance said the nation's consumption is feeling the pinch of the virus because people have shunned crowds over fears of infection.

The nation's aviation, hotel and restaurant sectors are expected to take a harder hit from the COVID-19 virus outbreak, as a large proportion of visitors come from China.

Earlier this month, the ministry said it will provide 2 trillion won (US$1.7 billion) in financial support to small merchants who are expected to be hurt by the spread of the virus.

The government will set up a fund of 60 billion won to help support the nation's shipping industry.

South Korea has reported 30 confirmed cases of the virus so far, with nine patients having fully recovered from the illness. 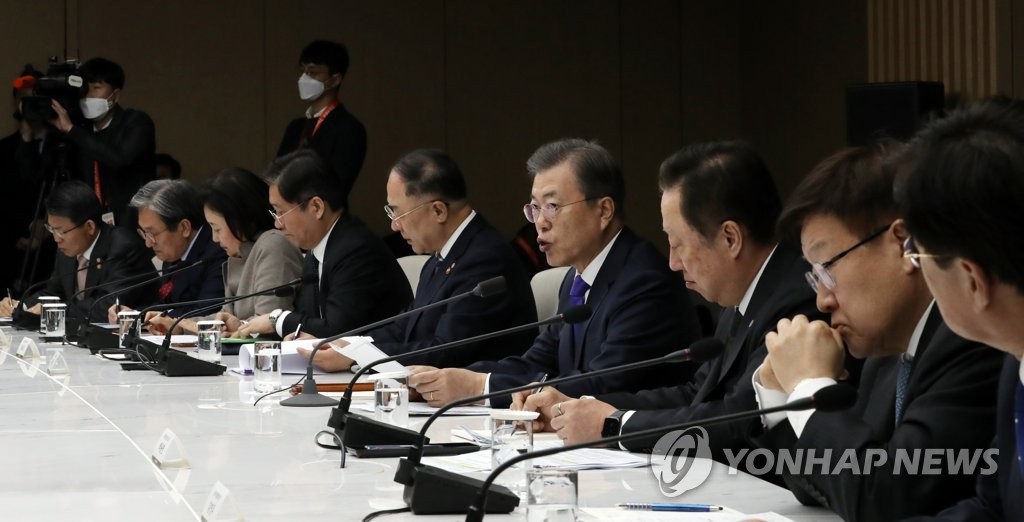 With uncertainty lingering about the peak of the coronavirus, which has killed more than 1,700 people and infected 70,000, mostly in China, South Korea is stepping up efforts to minimize the economic impact of the disease.

Vice Finance Minister Kim Yong-beom told reporters that the ministry will mobilize policy banks and loans to aggressively contain the economic impact of the virus.

However, the government has not been considering an extra budget because of the difficulty of gauging how broadly the virus will spread, Kim said.

The economic impact of the virus could be assessed in late March, when economic indexes of February industrial activities will be announced, Kim said.

South Korea's economy grew 2 percent last year, its slowest growth in a decade. The nation's finance ministry has predicted the economy will grow 2.4 percent this year.

Concerns are growing over South Korea's export performance down the road amid the coronavirus epidemic.

In the policy report, the ministry said it designated 10 industrial sectors for deregulation, including artificial intelligence and biotechnology, to help them develop technologies and services with fewer regulatory hurdles.

The ministry said it has set aside 15.8 trillion won in budget for innovation-led growth this year, up 46 percent from a year ago.

S. Korea to draw up further measures to contain economic impact of coronavirus

S. Korea to draw up further measures to contain economic impact of coronavirus