SEOUL, Feb. 17 (Yonhap) -- President Moon Jae-in instructed his economy team Monday to take "strong" measures to minimize the effects of the coronavirus outbreak and create "tangible changes" in the overall economy and people's livelihoods this year.

He warned of the possibility that the slump in South Korea's economy will be prolonged, saying economic damage from the COVID-19 outbreak is worse than that resulting from MERS in 2015.

If that is the case, it would wreak havoc not just on the national economy but also on people's lives, Moon stressed, speaking at the outset of a Cheong Wa Dae session to receive briefings on key policy plans for this year from four economy-related ministries.

"Literally, it's an emergency and a grave situation," he said in remarks that were broadcast live.

He pointed out Asia's fourth-largest economy has suffered as domestic consumption and people's leisure activities have diminished due to "overblown fear and anxiety" over the novel coronavirus, which originated in China.

"It is regrettable that the country's business and consumer sentiments have drastically worsened as fears and anxiety have been excessively exaggerated by (reports from) some news outlets," the president told the meeting, according to Cheong Wa Dae spokesman Kang Min-seok.

Moon insisted the best way to deal with exaggerated fears was to enhance transparency, Kang said in a press release.

The president earlier asked the public to have faith in the government's quarantine measures and to resume their daily activities.

"It is time to focus all-out efforts on revitalizing the economy, while maintaining the people's safety," the president stressed. "The government will remain vigilant and do its best in terms of quarantine steps until the end."

His call apparently reflects the government's confidence that it can contain the virus in the near future. A total of 30 confirmed cases have been reported, with no deaths. Several patients have been declared fully cured, while the remainder are hospitalized and in a relatively stable condition. 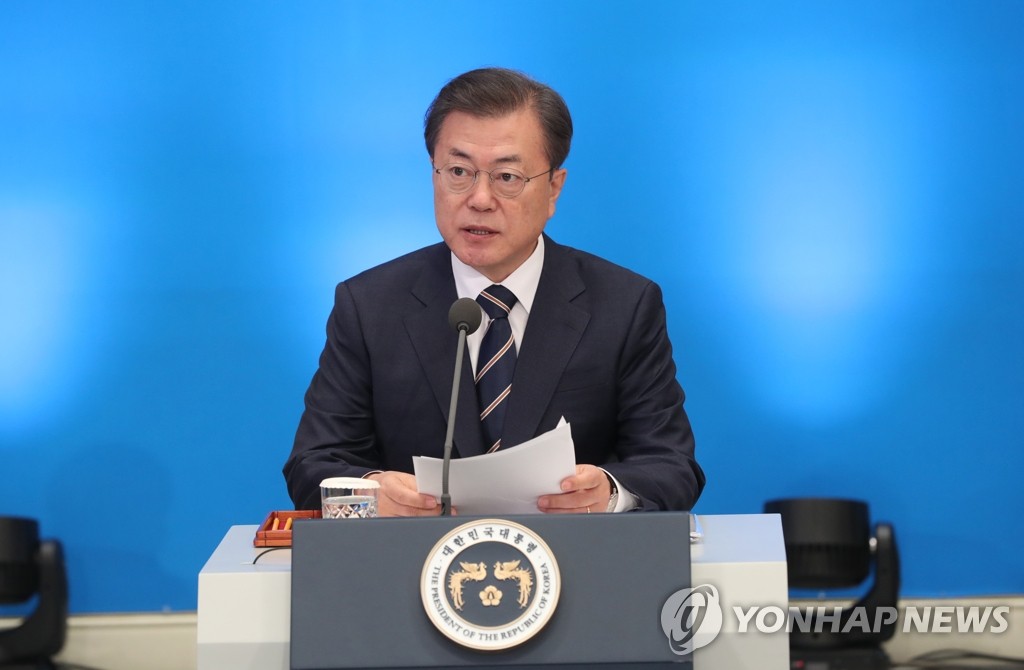 "This year, the economy ministries have a vital task to show tangible changes in the people's livelihoods and the economy," Moon emphasized. "Their shoulders have become heavier due to the recent COVID-19 incident."

He said they have done well so far.

In 2019, in particular, South Korea made a foothold for its economic recovery through expansionary fiscal policy and preemptive policy steps in the face of such external challenges as a global economic slump and Tokyo's export curbs against Seoul, according to Moon.

"On the other hand, (we) have run without halting on the path of innovation, inclusiveness and fairness for the fundamental transformation of economic structure and strengthening of fundamentals," he added.

Among the economy team's achievements last year, Moon said, the most significant was the response to Japan's export control.

South Korea has overcome the difficulty on the basis of a unity of government, business and the people, he said.

"We have reduced dependence on Japan for the supply of three major industrial items (affected by the export control) and gained confidence over homegrown production of materials, parts and equipment. It was a good example of turning a crisis into an opportunity."

He called on the economy team to maintain its close teamwork to minimize the effects of the virus and take "strong measures" to put vigor back into the economy.