JEONJU, South Korea, Feb. 17 (Yonhap) -- At least one person was killed and 28 others injured in an expressway pileup in the country's southwestern region, authorities said Monday.

Around 20 vehicles piled up in the accident that occurred at 12:23 p.m. in a tunnel on a highway connecting Suncheon and Wanju in North Jeolla Province, according to police and fire authorities.

Police have sealed the accident site and rescue efforts are under way, but casualties are expected to rise as a tank truck carrying chemicals caught on fire, causing a toxic gas leak. The exact details of the chemical substance are yet unknown. 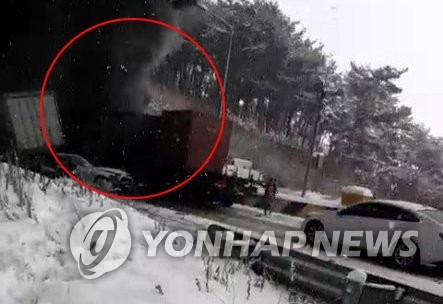