SEOUL, Feb. 18 (Yonhap) -- Hyundai Motor Co., South Korea's biggest carmaker by sales, on Tuesday suspended one of its five main assembly plants in Ulsan due to a lack of parts from China amid the spreading coronavirus outbreak.

Hyundai said the No. 1 assembly plant in Ulsan, 414 kilometers southeast of Seoul, is set to be closed until Thursday, a move that will disrupt production of the Veloster subcompact and the Kona subcompact SUV.

The latest halt came five days after Hyundai Motor resumed operations at the assembly line in the southeast industrial city of Ulsan. 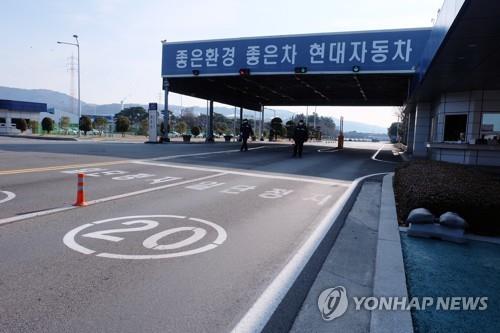 The plant had been shut down from Feb. 5 through 12 due to shortages of wiring harnesses, a key component for a variety of models, made by China-based South Korean suppliers.

Currently, the four other assembly plants in Ulsan were operating normally, though Hyundai said it is considering suspending operations at the No. 2 plant in Ulsan for one day Friday due to shortages of wiring harnesses.

Shortages of wiring harnesses came as the Chinese authorities called on manufacturers to stop operations until Feb. 9, a week after the end of the Lunar New Year holiday, to keep the coronavirus outbreak from spreading further.

Hyundai and its affiliate Kia Motors Corp. halted all production at their domestic plants on Feb. 7 before gradually resuming operations last Tuesday and getting fully back up and running at the five plants in Ulsan.