SEOUL, Feb. 18 (Yonhap) -- President Moon Jae-in ordered his Cabinet on Tuesday to mobilize all available "special" means to handle the "emergency economic situations" attributable to the continued spread of the novel coronavirus.

"Emergency situations require an emergency prescription. The current situation is much more serious than (we) thought," he said in his opening remarks during a weekly Cabinet meeting at Cheong Wa Dae.

The president stressed that, "It is the time when special measures are absolutely necessary to use every possible means that the government can mobilize."

Moon's strong call reflects his resolve to minimize the pandemic's impact on the South Korea economy that the government said was on the cusp of revival starting in the last quarter of 2019.

A number of foreign investment banks have lowered their growth outlooks for South Korea's economy, citing the effects of the virus.

On Monday, Moody's Investors Service cut its forecast to 1.9 percent from 2.1 percent. JP Morgan earlier slashed it by 0.1 percentage point to 2.2 percent.

Moon emphasized the importance of timely and preemptive steps to put the momentum of recovery back on track.

He said the Cabinet approval for the use of the government's emergency funds in response to the COVID-19 pandemic should be just the "beginning," adding the early spending of state budgets is a basic step the government should do.

"This is not enough," he added. "In order to respond to the emergency economic situations, I want you to exert policy-related imagination that goes beyond expectations with no restrictions."

He cited the expansion of tax incentives and regulatory reform to promote corporate investment as well as special financial support for small and medium-sized firms and measures to relieve tiny shop owners of rent burdens.

Moon asked the National Assembly to cooperate in the government's campaign to ride out the trouble.

Earlier in the day, South Korea reported its 31st confirmed case of the virus despite some signs of the spread slowing amid a relatively thorough web of pan-national quarantine networks.

Moon also noted that the fight against the virus is not a problem just for South Korea, calling for close international cooperation.

"In addition to the situations in China, which are still serious, the worsening ones in Japan are emerging as another variable," he said. "To be safe from a contagious disease, it's important for neighboring countries to stabilize the situations as early as possible."

Moon stated it's necessary for South Korea to join hands with neighbors against such a cross-border disaster.

Cheong Wa Dae spokesperson Kang Min-seok said the government will soon map out a set of measures to prop up economic growth and the people's livelihoods.

"The first batch would be made by the end of February, and (the government) would consider additional policy means," he said at a press briefing.

The official would not confirm whether Cheong Wa Dae is pushing for the early allocation of supplementary budgets.

He added the president's strongly worded statement on the economy during the Cabinet session was meant to stress the need to put "all policy options" on the table.

Regarding Moon's request for lawmakers' cooperation, Kang said it was a message asking for bipartisan efforts against the coronavirus outbreak, including related legislation. Ruling and opposition parties have agreed in principle to establish a special committee on the coronavirus, but they are sparring over details including its name and chairmanship.

Several revision bills on preventing and managing contagious diseases are pending in the parliament, along with a revision bill on medical services. 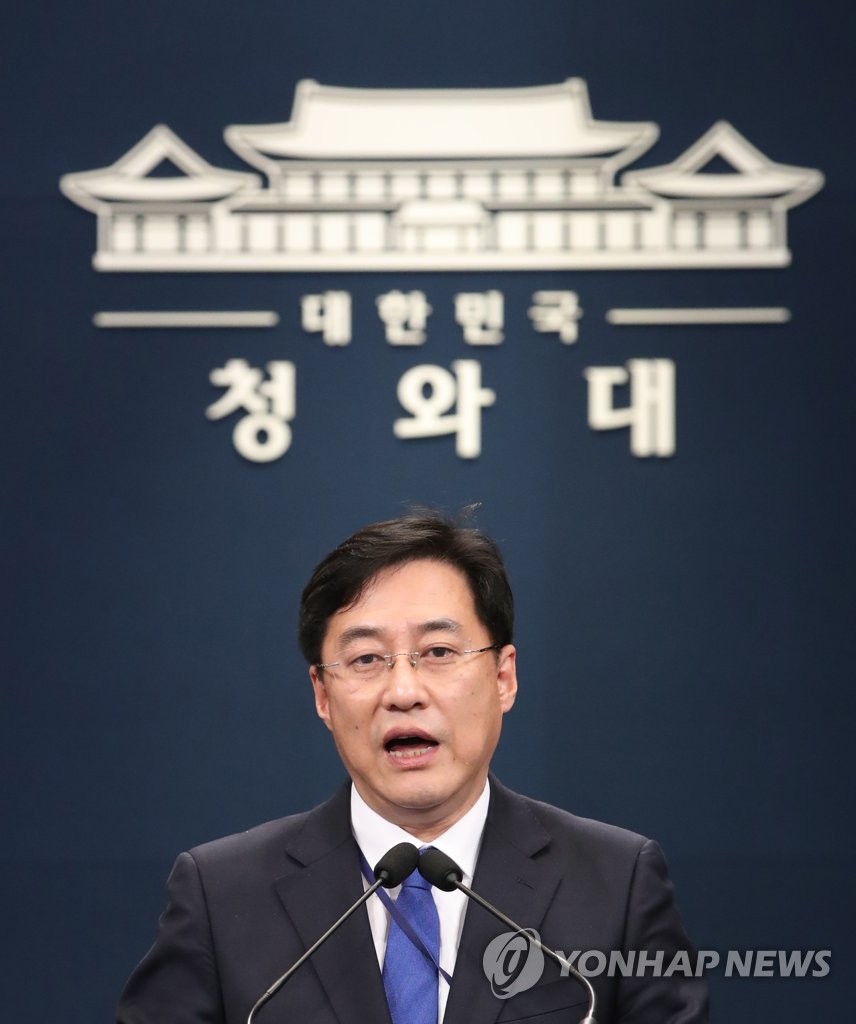