SEOUL, Feb. 18 (Yonhap) -- The majority of victims in a deadly humidifier sanitizer scandal that broke out in 2011 are still suffering from various physical and mental illnesses, a report showed Tuesday.

Mental symptoms were also on a serious level, with 72 percent suffering depression or anxiety and 71.2 percent experiencing a fall in concentration and memory. A total of 66 percent said they have sleep disorders, while 64.5 percent said they feel anger.

The report raised concerns over their mental health, with 49.9 percent saying they have had suicidal thoughts and 11 percent actually having attempted suicide. 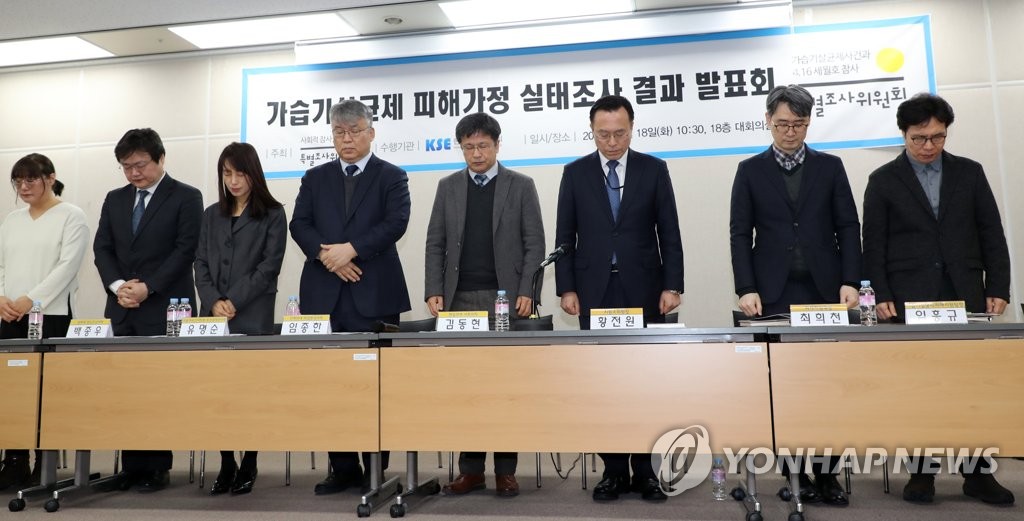 The report, carried out by the Korean Society of Epidemiology and led by the Special Commission on Social Disaster Investigation, is the first major survey on the health conditions of the humidifier sanitizer scandal victims.

The report was based on online and post surveys of the 1,152 families between June 13 and Dec. 20 last year. The research team also conducted focus group interviews and house visits.

Researchers underscored the need to provide lifelong support, including suicide prevention services, for the victims.

"The support measures should be reinforced in a way that puts victims at the center. A lifelong and 'lifewide' victim support system should be put into place," said Professor You Myoung-soon of Seoul National University.

"I can at least speak in front of the mike like this because I'm alive. But there are many who are filled with sorrow and who blame themselves for buying (the problematic humidifier sanitizer) for their families," said Seo Young-cheol, who claimed he developed asthma after using the cleaning product.

Local authorities launched a probe into the case and concluded that it was caused by polyhexamethylene guanidine, an anti-bacterial agent used in the humidifier cleanser that can be fatal when inhaled in the form of droplets.