SEOUL, Feb. 18 (Yonhap) -- Director Yi Seung-jun said Tuesday that he hopes people will talk more about the tragedy of the Sewol ferry sinking after watching his Oscar-nominated short documentary film about the incident.

"The purpose of this documentary was to tell the truth of the Sewol incident to as many people as possible overseas. I think I kept the promise with the families of the victims," Yi said in a press conference in Seoul for the promotion of "In the Absence." "I think this is the beginning. I hope that my film can cause the Sewol incident to be a topic of conversation again." 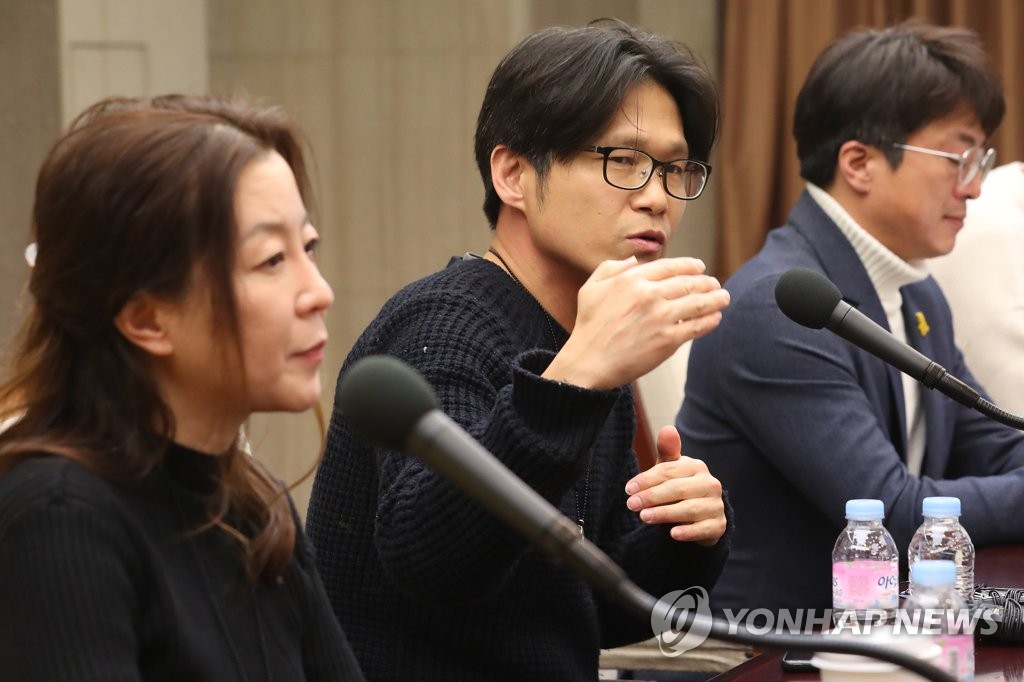 The 29-minute film was nominated in the documentary short subject category of the 92nd Academy Awards held on Feb. 9, becoming the first South Korean documentary film to earn an Academy nomination.

It was also one of the two South Korean Oscar nominees at this year's Oscars, along with Bong Joon-ho's "Parasite" that grabbed four titles, including best picture.

The documentary is about the sinking of the 6,800-ton Sewol ferry in April 2014 that killed more than 300 people, most of whom were high school students on a spring field trip. It goes deeply into the government's flawed search-and-rescue operations at that time and its follow-up measures.

The movie drew favorable responses from media and audiences alike during official screenings before the Academy Awards, although it failed to win a trophy.

The film won the grand jury prize in the 2018 DOC NYC, an annual documentary film festival in New York City, and took home a prize at the World Press Photo Digital Storytelling Contest for Long Form in 2019.

U.S. audiences, during the screenings, seemed to feel the same anger that Koreans did, according to the director.

He said they were agitated by scenes of the captain of the Sewol ferry, who gets off the sinking vessel first and seeks to be rescued even though his young passengers are still trapped inside.

"The U.S. audiences showed the same reactions," he said. "Their reactions are even more aggressive than those of Koreans."

Yi attended the Oscar ceremony, along with mothers of two students who lost their lives in the Sewol sinking.

"We didn't plan to hit the red carpet, but we got the chance as wives of our director and producer made concessions to us," said Kim Mi-na, one of the two mothers. "I went there with photos of some 250 students. I was happy to take pictures with famous Hollywood stars there, carrying the photos."

The director said he spent most of time editing video and audio records on one of the worst maritime disasters in South Korea as the film was aimed at foreign audiences from the offset.

His U.S. producer, Field of Vision, played a role in streamlining the storyline and making the film more understandable and acceptable in the United States.

"As I targeted foreigners, editing was essential and difficult. I was wondering whether foreigners could catch the complex context of the Sewol tragedy," Yi said. "Our U.S. producers suggested employing a U.S. editor and his editing made the film more tranquil."

"It's not necessary for a director to make a film in the U.S. to receive favorable reviews in the U.S.," he said. "But you need more to get a nod from the Oscars. You have to have financial support either from a U.S. producer or from the South Korean government to go through the awards season."