SEOUL, Feb. 18 (Yonhap) -- Asiana Airlines Inc., South Korea's second-biggest airline, on Tuesday said all of its employees will take unpaid leave as air travel demand has plummeted due to the spreading coronavirus outbreak.

Some of about 10,500 employees are set to take 10 days of unpaid leave starting Wednesday. Others will join the cost-cutting measure later in a way that does not affect flights. 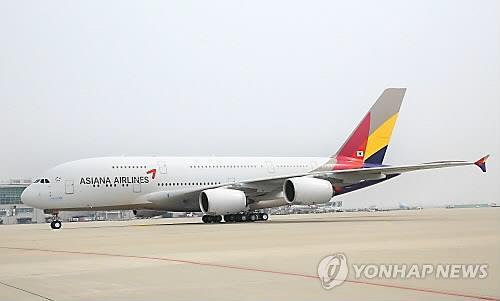 Asiana Airlines also said it will cut wages of its CEO, executives and heads of departments by 40 percent, 30 percent and 20 percent, respectively.

"We are desperately trying to come up with and implement measures to overcome a crisis of a massive operating loss this year," Asiana Chief Executive Han Chang-soo said in a statement.

All executives will offer to resign in a show of their commitment to overcoming difficulties sparked by the coronavirus, called COVID-19.

The move comes as Asiana has temporarily halted 12 out of 26 routes to mainland China and reduced flights on 12 routes to the world's most populous country, leaving only two routes intact.

Asiana is currently running 57 flights to China per week, compared with 204 before the coronavirus outbreak.

The virus has killed more than 1,860 people in mainland China.

Asiana said flights to China accounted for 19 percent of its total sales at the end of September last year, the highest such proportion among local airlines.