Vice Foreign Minister Kim Yong-beom made the comment to reporters in Washington after expressing worries about the "shock" the COVID-19 virus outbreak is expected to deliver to the South Korean economy. 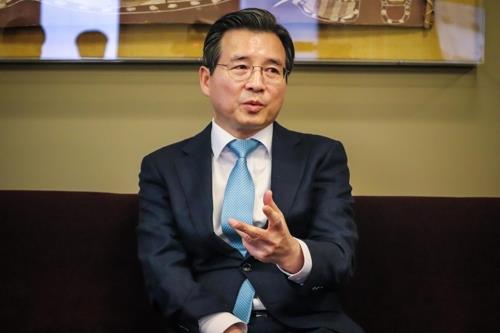 "China is the second largest economy in the world, and we are closely tied to the Chinese economy, so I believe that a sizeable shock will be inevitable," he said on the margins of an event promoting Korean innovation and technologies, at the headquarters of the World Bank.

"We've announced measures for certain sectors like businesspeople, shipping, aviation and tourism, but I think we will have to soon come up with a package (of measures)," Kim said. "We are trying to produce the first round of comprehensive measures as soon as possible."

The vice minister was expanding on a policy report his ministry submitted to President Moon Jae-in on Monday. In that report, Finance Minister Hong Nam-ki said the measures will be introduced by the end of this month and include policy tools to support exports, consumption and investment.

Asked if the government is considering an extra budget to cope with the economic fallout, the vice minister refused to commit either way, saying that the country's financial reserves are "sufficient."

But he also noted that Moon on Tuesday spoke of an "emergency economic situation," which he said reflects the seriousness of the impact of the coronavirus.

"The president called for much more aggressive measures, but I think those will be difficult to prepare by the end of this month," he said, adding that such steps would be taken in line with the extent of damage.