According to the Korea Centers for Disease Control and Prevention (KCDC), 13 new patients reside in Daegu, 300 kilometers southeast of Seoul and adjacent areas. They are presumed to have contracted the illness via contact with a 61-year-old South Korean woman who was diagnosed with the COVID-19 virus infection Tuesday.

The country's 31th patient, probably a coronavirus "super spreader," also lives in the city. She started to complain of a fever on Feb. 10 and was tested Monday at a local health center, after which she was sent to a hospital and placed in quarantine for treatment and monitoring.

The patient visited Seoul late last month, was treated at a hospital after a car accident and went about her everyday life in which she used public transportation.

The health authorities said that the 11-year-old daughter of the country's 20th patient who was confirmed to be infected on Feb. 5 tested positive for the illness, while a 77-year-old man has also been diagnosed with the virus, according to the KCDC. The man has not traveled abroad.

The number of people being checked for the virus and under quarantine came to 1,030 as of early Wednesday, up from 818 the day before the KCDC said in a release. South Korea has screened 10,411 people for COVID-19 since Jan. 3, with 9,335 testing negative and 12 people having been discharged from quarantine after making full recoveries. 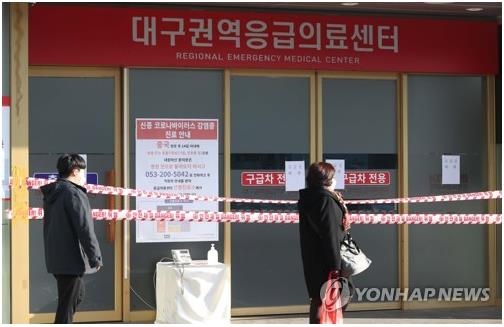