The Cultural Heritage Administration (CHA) said the Daegunjubo, a national seal crafted in 1882 during Joseon King Gojong's reign, and the Royal Seal of Hyojong, made in 1740, have been safely brought home after being donated by a Korean-American last December.

The Korean resident in the U.S., Lee Dae-soo, who purchased the seals through an auction in the 1990s, donated them to the South Korean government. They are believed to have been illegally shipped out of the country a long time ago.

The CHA plans to hold a special exhibition of the two royal seals at the National Palace Museum of Korea in central Seoul from Thursday to March 8. 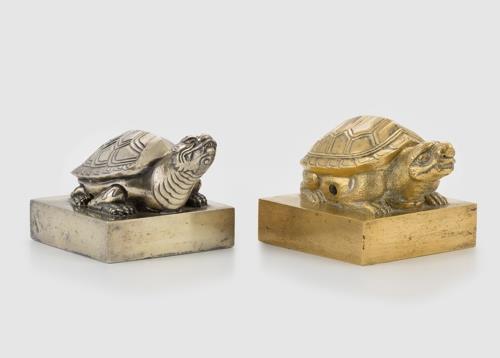 Daegunjubo was a national seal, or "guksae" in Korean, which was stamped on diplomatic and administrative documents as a symbol of national authority.

Daegunjubo is made of silver and weighs 4.1 kilograms; it is 7.9 centimeters in height and 12.7 cm in length and has a turtle-shaped handle on its body, according to CHA's release. Historical documents say the seal was crafted by King Gojong, the 26th king of Joseon, in 1882 for diplomatic use and was officially used until 1897. It was also used in appointment papers and acts, royal orders and edicts issued by Gojong.

The Royal Seal of Hyojong is a ceremonial seal, or "eobo" in Korean, which was crafted to honor kings and queens or praise their accomplishments posthumously.

The gold seal weighs 4 kg and measures 8.4 cm in height by 12.6 cm in length; it also bears a turtle-shaped handle. It was crafted in 1740 during the reign of King Yeongjo, the 21st king of Joseon, when the posthumous title "myeonguijeongdeok," which means "bright righteousness and correct virtue," was bestowed upon King Hyojong, the dynasty's 17th king. 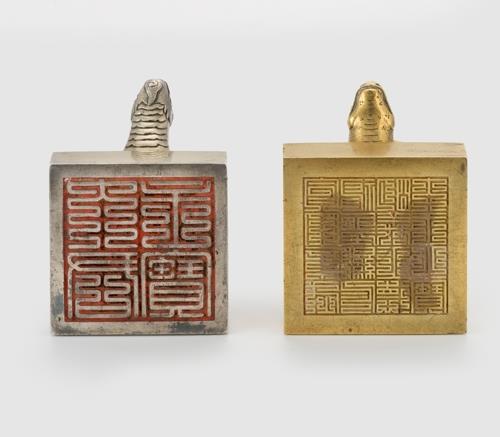 A total of 412 guksae and eobo seals were crafted during the Joseon Dynasty, 73 of which remain missing. Since Korea's liberation from Japan's colonial rule in 1945, six guksae seals and eight eobo seals have been repatriated from the U.S. through negotiations, donations and investigations.

"King Gojong ordered the production of Daegunjubo to replace the previous royal seal awarded by ancient Chinese dynasties of Ming and Qing. It probably reflected Gojong's intention to move away from a diplomatic policy centered on China and shift towards an independent sovereign state," said a researcher at the National Palace Museum of Korea.