SEOUL, Feb. 19 (Yonhap) -- President Moon Jae-in expressed concern Wednesday about reports of a "considerable" number of new patients here infected with the novel coronavirus, stressing the importance of strengthening "regional defense" against the further spread of the virus.

He also reaffirmed his administration's resolve to protect children and students from such diseases and other dangers like fine dust, speaking at a rare Cheong Wa Dae meeting with superintendents of the educational authorities in 17 major cities and provinces.

"Today, I received a report that the number of confirmed patients has increased considerably," he said at the outset of the session, open to pool reporters. "It seems linked with the 31st patient (reported) yesterday, a case which has caused lots of concerns." 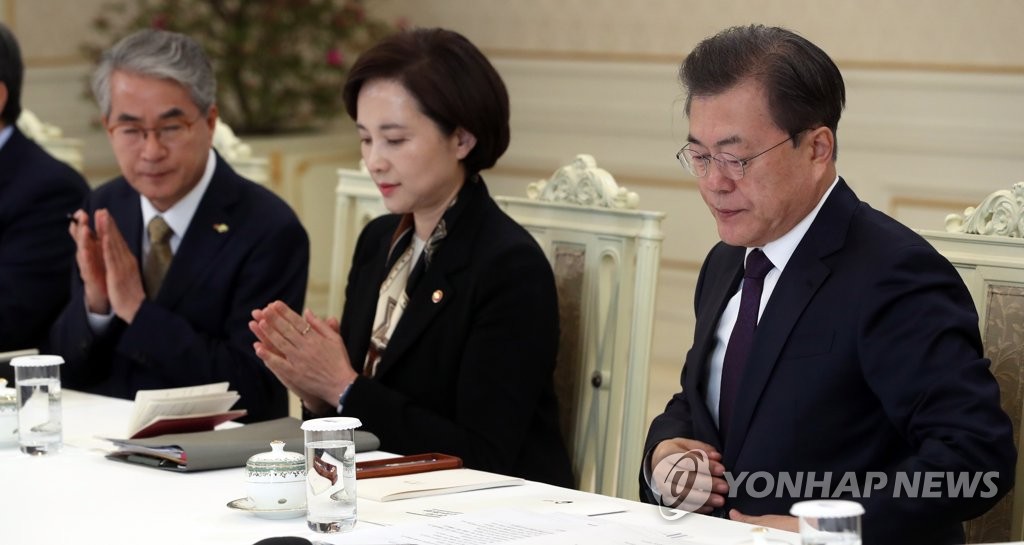 He emphasized the necessity of establishing a "sure-fire community-based local defense network by greatly strengthening the community infection response system."

"Keeping children safe is the most important responsibility of the government and the education authorities," the president said. "Using the COVID-19 outbreak as a prompt, we plan to produce tangible changes in school safety so that the people can actually feel their effects."

His remarks came as many schools in South Korea, mostly universities, have postponed the opening of the spring semester in connection with the virus.

Moon noted that the government has provided schools with 25 billion won (US$21 million) for the purchase of disinfection and quarantine materials.

He asked the top education officials to ensure that such equipment will reach every school.

Moon made no specific mention of public anxiety over the inflow of Chinese students after the winter vacation. About 20,000 students have returned to South Korea between Jan. 1 and Feb. 14, and tens of thousands more are expected to come soon.

It is the first time in eight years that a South Korean president has convened a formal meeting with the superintendents of the local education boards.

Earlier in the day, the country's health authorities announced 15 more cases of COVID-19, bringing the total number of infections here to 46. Most of the new patients live in Daegu, 300 kilometers southeast of Seoul, and adjacent areas. They are presumed to have contracted the virus through contact with a 61-year-old South Korean woman diagnosed with the coronavirus Tuesday.

She is called a "super-spreader" by the media as she is believed to have infected at least 11 others. It is not yet clear how she was infected.

The head of the Daegu education office said, "There are a lot of worries. The situation has become quite different yesterday and today," according to Cheong Wa Dae spokesperson Kang Min-seok

She was quoted as adding that the entire city of Daegu, which used to be a "clean area" in terms of the virus, is "perplexed" by the confirmed cases.

Kim Seung-hwan, the chief of North Jeolla Province's education authorities who chairs the superintendents' council, said both overestimating the virus' spread and overreacting to it are "problematic."

"There's a big impact from unnecessary (public) anxiety. I think a sense of stability is of importance, plus a thorough response," he said.

Regarding other education-related pending matters, meanwhile, Moon held out expectations that the outgoing National Assembly will have its "last chance" to handle bills in late May.

"(The government) will do its best so that the decentralization of local education can expand," the president said when concluding the meeting, according to Kang, who spoke at a press briefing.