SEOUL, Feb. 19 (Yonhap) -- K-pop made a big stride taking over the global music scene last year with the historic dominance of boy bands BTS and SuperM on the Billboard 200 album charts.

Seven-piece girl band Cignature is the first of the army of new idol bands making a debut this year.

Cignature dropped its debut single, "Nun Nu Nan Na," on Feb. 4, braving the long lineup of established girl bands making a comeback to the K-pop scene in the same month, including IZ*ONE and Loona.

The band chose the disco genre for the debut single, which is laced with rollicking and addictive refrains. The debut song's acrobatics-peppered choreography is the creation of the band members, and three of the members also worked as producers for the album.

"Sorry Mama" is of the popular EDM trap hip-hop music genre, and the members pinpointed global K-pop stars BTS as their role models during their media showcase on Feb. 3. 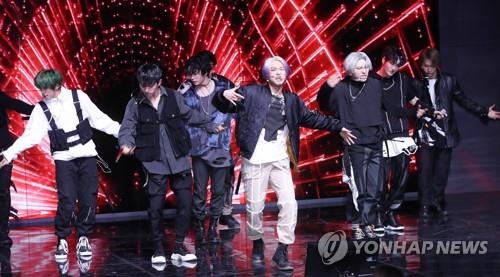 FNC Entertainment, the music label of Korean idol rock bands F.T. Island and CNBLUE as well as girl band AOA, is also on its way to debut its first boy band in four years.

"FNC is set to launch a new boy band this summer ... (we) plan to carry out a large-scale global project to demonstrate the new boy band's talent and identity," FNC said in a statement Wednesday, without disclosing details about the band.

Starship Entertainment, the home to popular boy band Monsta X, is scheduled to unveil a new nine-piece boy band in the first half of this year, the company's first new boy band in six years.

The band's lineup will include Kang Min-hee and Song Hyeong-jun, former members of boy band X1, which disbanded earlier this year amid a vote-rigging scandal facing a cable TV idol audition program after X1 debuted through the show.

Later in the year, giant music labels including SM Entertainment and Big Hit will join the market for new idol bands, further heating up the K-pop scene.

SM, which boasts arguably the most star-studded lineup of contract artists including Red Velvet and SuperM, is rumored to be on its way to launch a new girl band this year.

Following the successful launch of Red Velvet in 2014, SM has not unveiled any girl bands over the past seven years.

Details about the upcoming girl band remain shrouded in secrecy, but once launched, the band, buttressed by SM's longtime K-pop expertise and dominance, is likely to make a splash on the music scene.

Big Hit and CJ ENM, the operator of K-pop-oriented channel Mnet, are also scheduled to introduce a new idol boy band within this year through their joint venture Belift Lab.

Having produced music for BTS and TXT, Big Hit co-CEO Bang Si-hyuk will take the helm of music production for the envisioned boy band.

Coupled with CJ ENM's K-pop specialty gleaned from its run of several K-pop idol audition shows, the joint venture is likely to rock the K-pop scene once again.