SEOUL, Feb. 20 (Yonhap) -- The military has banned service personnel in the southeastern city of Daegu from leaving their bases, including for vacations, and meeting with visitors in the wake of a surge in new coronavirus cases in the region, the defense ministry said Thursday.

Of the 82 confirmed cases of COVID-19 so far, 48 were reported in the southeastern region, and the figure is feared to grow further as most of the Daegu patients were found to have attended the same church services that brought together around 1,000 people.

Currently, around 300 soldiers are in isolation, as they have either visited China, Hong Kong or Macao in the past 14 days or had contact with people who traveled to those places, according to the ministry.

The ministry also decided to hold the entrance ceremonies of the military academies in a scaled-back manner without inviting family members and acquaintances of their freshmen.

"No suspected or confirmed cases of the new coronavirus have been reported among service personnel. The ministry continues to seek diverse preventive steps to prevent the spread of the virus into barracks," Choi added. 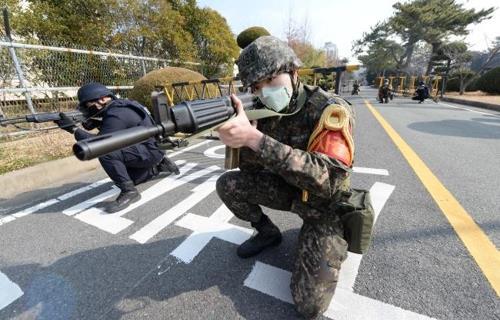