JEJU, South Korea, Feb. 20 (Yonhap) -- A South Korean woman, who stunned the nation last year when she was accused of brutally killing her ex-husband, was convicted of murder and sentenced to life imprisonment by a local court on Thursday.

The Jeju District Court handed down the guilty verdict to Koh Yu-jeong, saying a hefty sentence was inevitable because she has failed to express any remorse or sympathy for her victim.

The 37-year-old Koh was indicted last year for killing her ex-husband and 5-year-old stepson in two separate incidents. 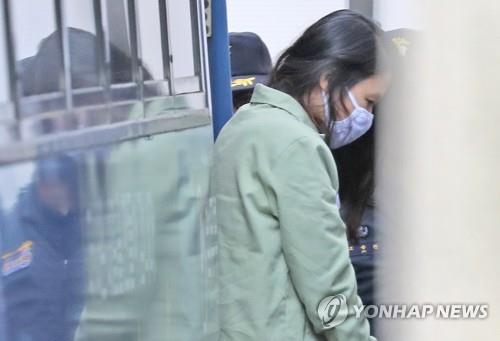 Koh allegedly killed her former husband, surnamed Kang, at a pension on the southern resort island of Jeju in May last year. She is also suspected of mutilating his body and disposing of it.

She was indicted on separate charges of having suffocated her current husband's five-year-old son to death at their home in Cheongju, 120 kilometers south of Seoul, in March 2019.

Koh has argued that the killing of her ex-husband was not premeditated, while denying having killed her stepson.

In the previous court hearing last month, prosecutors sought the death penalty for Koh over the two suspected murders.

But the Jeju court acquitted the woman of the charge of killing her stepson, refusing to recognize evidence presented by the prosecution.

The court said that Koh lured her former husband over her visitation rights for their son and fed him Zolpidem, a sleeping pill, before mutilating his body and hiding the body parts.

"A heavy punishment is unavoidable because the defendant has not shown any remorse or sympathy for her victim," the court said, noting she further shocked the public and saddened the bereaved family by insisting that she accidentally committed the killing in the process of preventing the victim from raping her.

The court also explained that it decided to stick to the presumption of innocence regarding her murder charge for her stepson due to an inconsistency in the case's supplementary evidence.