SEOUL/JEJU, Feb. 20 (Yonhap) -- A South Korean Navy sailor on the southern island of Jeju tested positive Thursday for the new coronavirus in an initial examination, government officials said, sparking concerns the virus might have spread into military barracks.

The final test result will be available the following day, according to the officials. If confirmed, it will mark the first confirmed case among service personnel in South Korea.

According to officials, the sailor in his 20s visited his hometown, Daegu, 300 kilometers southeast of Seoul, from Feb. 13-18. Upon returning to the base, he showed symptoms, such as coughing, prompting the authorities to immediately quarantine him at the base, the officials said. He is now at a Jeju hospital.

"We are tracing his movements and have been checking the status of other service members at the barracks," an official noted.

More than 70 cases confirmed over the past couple of days were from the southeastern city of Daegu and its surrounding North Gyeongsang Province, according to health authorities. As of Thursday, South Korea has 104 cases, including one death.

As part of efforts to prevent the spread of the potentially deadly virus into the barracks, the defense ministry has taken measures such as banning soldiers' travel to China, refraining from staging outdoor drills, and limiting their off-installation travel and visitors. 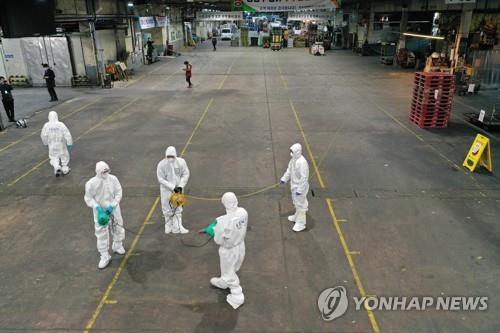