SEOUL/JEJU, Feb. 21 (Yonhap) -- A number of coronavirus cases were confirmed among military personnel for the first time Friday, including an Air Force officer at the Gyeryongdae military headquarters, sending officials scrambling to stop the virus from spreading further into the barracks.

He met his girlfriend in Daegu during his vacation, where dozens of cases were confirmed within a couple of days. The girlfriend attends the same New World Church, or Shincheonji Church of Jesus, as the country's 31st patient, who is considered a "super spreader," officials said.

An Air Force soldier currently assigned to a unit at the military compound in Gyeryong, South Chungcheong Province, was also confirmed to have the virus and was transferred to a military hospital earlier in the day. The route of his infection is not yet known.

The military authorities also have carried out surveys of all personnel on whether they have recently visited Daegu or the surrounding regions, according to officials.

Following the confirmations, the military authorities have checked the temperature of all personnel where the infected members serve and quarantined all those who had contact with the patients, they added. 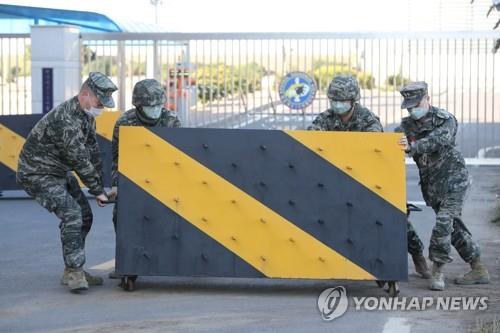