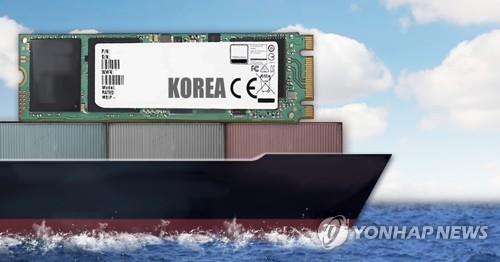 Exports of petrochemical goods and ships, on the other hand, decreased 4.1 percent and 29 percent, respectively.

The decrease apparently came as the global spread of the new coronavirus has sapped demand from China, the country's top trading partner.

The suspended operations of China-based production lines also disturbed the supply of key industrial parts and materials for Asia's No. 4 economy.

Outbound shipments to China fell 3.7 percent on-year in the first 20 days of the month. In contrast, exports to the United States soared 24.2 percent over the cited period, with shipments to Vietnam also rising 19.8 percent.

South Korea's exports fell 10.3 percent in 2019, hit by a slump in the global chip market, coupled with the trade feud between the U.S. and China.

The country, however, acknowledged earlier this week that the outbreak of COVID-19 would have an adverse impact on the recovery.