The Korea Centers for Disease Control and Prevention (KCDC), and public health authorities in North Gyeongsang Province said Thursday that five nurses at the psychiatric ward at Daenam Hospital in Cheongdo, 320 kilometers southeast of Seoul, have all tested positive for COVID-19.

The country's first death from the virus was reported at the same hospital.

The country's health authorities said a total of 16 people have tested positive for the virus out of 600 patients and medical staff at the hospital.

As of Friday morning, the country has reported 156 cases of COVID-19. In just three days, the number of virus infections almost tripled, most of which -- 82 cases -- have been traced to church services in Daegu, home to 2.5 million people.

The first infection was confirmed here on Jan. 20. 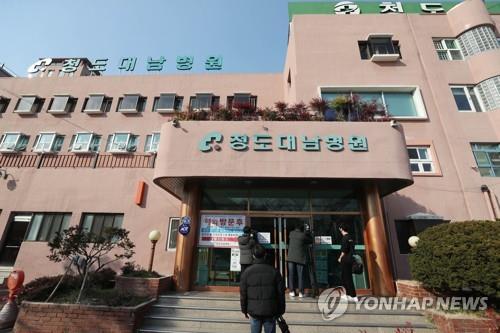 Transmissions taking places in hospitals and clinics are of grave concern because of the risk of exposing sick people, who are more vulnerable to infections, to the virus.

The KCDC said that it is in the process of checking everyone as quickly as possible and plans to move people who have tested negative to other medical facilities for observation.

Infections among medical staff are of particular concern, as South Korea struggled with outbreaks related to medical institutions during the 2015 Middle East Respiratory Syndrome (MERS) outbreak that resulted in 38 deaths after 186 people were infected in the country.

It is estimated that 172 of the people infected at the time contracted MERS at medical institutions, with the total including 25 doctors, nurses and medical support personnel.