SEOUL, Feb. 21 (Yonhap) -- As part of its efforts to combat the new coronavirus, the government has asked elementary and secondary schools nationwide to verify and report their foreign students' record of visiting China and their current whereabouts, the Ministry of Education said Friday.

All elementary, middle and high schools were asked to submit a monitoring report on their non-Korean students by Friday dictating whether they have recently traveled to China, including Hong Kong and Macau, and where they were staying as of the previous day, the ministry said.

It requested that the monitoring report also include all foreigners preparing to enter or transfer to the South Korean schools, in addition to their currently enrolled students.

Regarding students who are currently staying in their home countries, in particular, the ministry asked the schools to report their expected return dates. 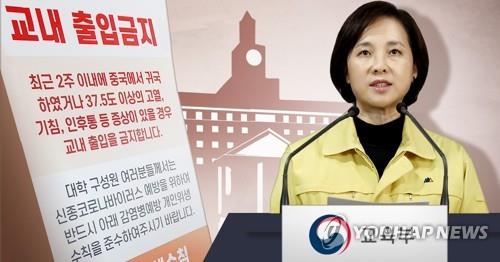 The ministry also sent the schools guidelines on how to protect their students from the COVID-19 outbreak.

South Korea reported 52 new cases of the new coronavirus on Friday, bringing the total number of infections in the nation to 156.

Like their South Korean counterparts, foreign students arriving from China will be barred from going to school and should isolate themselves for 14 days.

School officials have to give a prior notice on the 14-day quarantine measure to all students who have been to China recently.

Heads of schools, located in "vulnerable" areas, including those where confirmed cases of the new coronavirus have occurred, those where patients have visited and secondary infections or suspected patients have been reported, can also take a similar measure, it explained.

Amid the surge in confirmed cases, the number of elementary and secondary schools opting to delay the start of the spring semester may rise, ministry officials said.

The education authorities in Daegu, which has witnessed a sudden spike in confirmed cases this week, have already announced the postponement of the spring semester's start at all kindergartens and elementary and secondary schools in the southeastern metropolis.